“In a letter to Gérald Darmanin, French Minister for the Interior and of Religious Affairs, the Centre suggested that the CFCM statement may have negated French policy to ensure that Islam in France follows the Republic’s set of values, and could, even unwillingly, incite to further hate and violence against the Jews of France.”

The Wiesenthal Centre Director for International Relations, Dr. Shimon Samuels, argued that the statement by Mohammed Moussaoui, President of the CFCM (Conseil Français du Culte Musulman / French Council of Muslim Faith), seems to go beyond its religious mandate in his calls on all Imams and Mosque officials across France to:

“Where the Court endorsed the concept that Sarah Halimi’s murderer could not be tried because under the influence of narcotics, this time the Court calls for Hassan Diab to face the charges of terrorism....”

The Wiesenthal Centre Director for International Relations, Dr. Shimon Samuels, was present nearby the Copernic Synagogue in Paris on 3 October 1980. He had just accompanied Aliza Shagrir – the wife of late cineaste Micha Shagrir – a few minutes before she met her death outside the synagogue. A block away from the explosion, he heard the bomb go off and felt the shockwave.

From Corona Lockdown and Ambulances to Sirens, Rockets and Shelters

Blog by Dr. Shimon Samuels published in The Times of Israel
16 May 2021
https://blogs.timesofisrael.com/from-corona-lockdown-and-ambulances-to-sirens-rockets-and-shelters/

The euphoric hyphen from vaccinations and dropping masks – a hint of normality – mutated into the shriek of sirens and war. The equation is the bipolar jump into the 48 hours from Yom HaZikaron (Memorial Day) to Yom Ha’azmaut (Independence Day), in reverse. My Army Reserve unit was the Senior Education Corps in the IDF Education Office. In peacetime, we would entertain troops with non-military lectures. In wartime – as in the 1978 Operation Litani incursion into Southern Lebanon, sparked by the PLO coastal road busses massacre – we would move from one battery to another during a break in the shelling. There, our role was to get the soldiers to vent as in the role of a psychologist or a rabbi, to raise morale.

Read more: From Corona Lockdown and Ambulances to Sirens,...

In a letter to Iceland President, Guðni Thorlacius Jóhannesson, the Wiesenthal Centre’s Director for International Relations, Dr. Shimon Samuels, expressed outrage at “the spate of antisemitism yesterday in one of Iceland’s most read newspapers and websites, Visir.”

The unacceptable online messages are in the main:

- “The Nazis had no better students than the Israelis. Only the gas ovens are missing...” 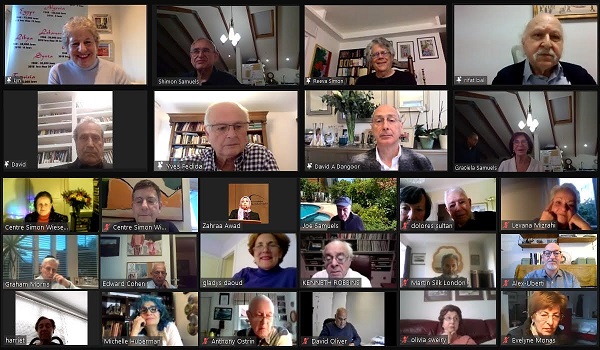