In a year filled with antisemitic rhetoric and attacks, the Simon Wiesenthal Center ranked their ten most prominent antisemitic incidents of 2022.

The Simon Wiesenthal Center (SWC) released its list of the top ten worst antisemitic incidents of 2022 on Thursday, in which the Jewish human rights organization described it as “a tremendous increase of Jew-hatred that infected mainstream culture, academics, and media across the world.”

So who made the cut?

Wiesenthal Centre to French Interior Minister: “Expulsions of Iquioussen and Hamouri should be Followed by Arrest!”

In September, Wiesenthal Centre Director for International Relations, Dr Shimon Samuels, congratulated French Interior Minister, Gerald Darmanin, for “the decision to expel Imam Hassan Iquioussen to his native Morocco, for his hateful remarks and incitement against France and the Jews.”

“His dual citizenship – French and Moroccan – led us to urge your counterpart in Rabat, Minister Abdelouafi Laftit, to jail Iquioussen on arrival and withhold him from any possible access to social media. This would be an important gesture also in the spirit of the Abraham Accords.”

Iquioussen fled France, but was apprehended in Belgium and is presently in prison there, pending definitive expulsion to Morocco.

Wiesenthal Centre Director for International Relations, Dr Shimon Samuels, calls on Gianni Infantino, FIFA President, to prevent the Qatar World Cup closing ceremony performance from becoming a political platform through the song by 24-years-old Egyptian rapper “Wegz”, entitled “The Pride of the Arabs” – or as translated by Teller Report “The Pride of the Arabs invades.”

According to Egyptian media, Wegz (also known as Ahmed Ali) first presented his song at a pro-Palestinian concert in Paris last May, wrapped in a Palestinian flag and a keffiyeh (see photos below). Wegz’ Instagram page is politically oriented, Palestine Online Twitter page celebrates him as “the pride of the Arabs” and an icon of their political agenda. 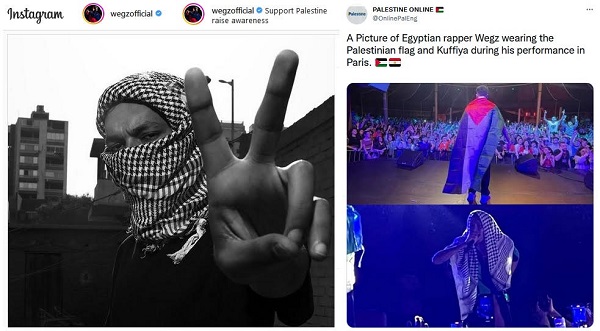 His pro-Palestinian and anti-Israel campaign, directed to Islamist elements in high-schools and universities through concerts in France, raised concern at the time and represents an added danger to Jewish communities.

Reportedly, Wegz even called to cancel Ronaldinho’s visit to Egypt, following his stay in Israel.

“Mr. President Infantino, the Qatar World Cup closing ceremony marred by a highly political atmosphere must be stopped by FIFA. Wegz must not perform as he did in Paris. The ‘beautiful game’ cannot become a platform for incitement to hate,” concluded Samuels.

Wiesenthal Centre Director for International Relations, Dr Shimon Samuels, expressed disgust at a conference, purportedly held at Sciences Po Menton (Political Science University of Menton, France) on 8 December, entitled “The Plundering of Palestine, Between Biblical Archaeology and Biblical Myths' Narratives.” The guest speaker was Ahmed El Dabash, a pro-Palestinian activist and a self-proclaimed researcher on ancient history. The conference was apparently organized by “Sciences Palestine” student club, though no trace of the event could be found on the Menton campus’ website, nor does this club appear on the university's list.

After the launch of their campaign on the 9th of December, CPV plans to hold another rally in Toulouse on Thursday 15th. Apparently, they have again hijacked JCDecaux billboards on the streets of the French city. This time round, their posters have the outline of their idea of “Palestine” – that includes Israel in its entirety – in Christmas-tree green with multicolour decorations.