Today, 25 October, the return match was held in the Parc-des-Princes Paris Stadium.

Posters by the “BDS-France” campaigners had appeared with the wording: “PSG match against Maccabi Haifa in Champions League next 25 October at Parc des Princes... #SPORTWASHING... Israeli Apartheid Is No Magic! BDS (Boycott Israel).”

One thousand police and Gendarmes were posted in and around the stadium, expecting a level 3 to 5 “high risk” for Israeli and Jewish fans, based on the experience of previous sport events. Heightened vigilance and police protection was needed.

The PSG “right wing pro-‘Palestine’ Ultras” decided to boycott the event as BDS-ers. Boycotting Israel was a flop.

The 1,650 Israeli supporters were exuberant and, even losing 2 to 7, their defeat was compensated by watching the football stars Messi, Neymar and M’Bappé.

The Israelis enjoyed Paris safely, accompanied by undercover agents, but vigilance will still be required until their departure.

The Simon Wiesenthal Centre Director for International Relations, Shimon Samuels, stated: “We will watch for antisemitism not only on the football pitch, but across France.”

Wiesenthal Centre to Imam Hassen Chalghoumi: “We are Relieved that You have been Saved from a Jihadi Stabbing”

The Simon Wiesenthal Centre Director for International Relations, Dr Shimon Samuels – together with its Dean and Founder CEO, Rabbi Marvin Hier, and Associate Dean, Director for Global Social Action, Rabbi Abraham Cooper – expressed solidarity with the Mosque of Drancy and its Imam, Hassen Chalghoumi, on behalf of the Centre’s French Friends and its worldwide membership. 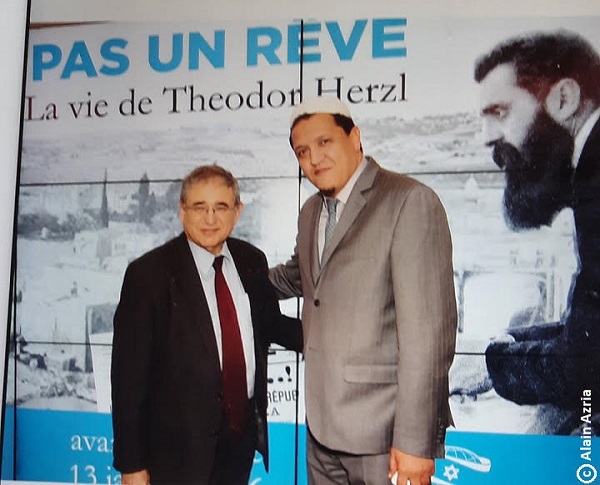 Samuels with Chalghoumi at Paris screening of “It is No Dream: the Life of Theodor Herzl”
(photo Alain Azria).

On behalf of the 400,000 members of the Simon Wiesenthal Centre worldwide, we call on INTERPOL to invoke its “Red Notice” applied to Mohsen Rezaee, charged by Argentina for the murder of 85 and wounding of over 300 in the 1994 bombing of the Buenos Aires AMIA Jewish Centre. This represents the deadliest attack on Jews since the Holocaust.

Commemoration of the Murder of High-School Teacher Samuel Paty

Yesterday, a meeting on Samuel Paty Square, facing the Sorbonne University, commemorated the events of 16 October 2020, when history and geography teacher, Samuel Paty, was assassinated and beheaded in a small town near Paris by a lone-wolf Jihadist of Chechen-Russian origin, incited by an islamist Imam, reportedly because he had shown, among others, caricatures of the Prophet Mohammed to his students during classes on the subject of “freedom of expression”.

Read more: Commemoration of the Murder of High-School...

It may appear that many of your 650,000 members of the CGT (General Confederation of Labour) cannot believe that you could abandon critical union rights negotiations in Paris, to go with a CGT delegation to pay homage at Yasser Arafat’s flashy Mausoleum in Ramallah.

In World War Two, your Confederation, CGT, was banned by Vichy and many members served in the Resistance. In 1945, Léon Jouhaux returned from a German concentration camp to rebuild a post-war CGT, with support from the American Federation of Labor. He helped to create the “International Confederation of Free Trade Unions”. In 1951, Jouhaux received the Nobel Prize for Peace.

Mr. Martinez, you can hardly fit in his shoes.