"Antisemitic blood libels in respected newspapers create a new generation, not only of antisemites, but also radicalized domestic Jihadists that threaten the security of your countries. Above all, incitement to hate and violence destroys all hope for a peace settlement in the Middle East"

The Centre called on the UAE and Oman "to take the same measures with their media's antisemitism as they would in combating expressions of Arabophobia and Islamophobia."

In letters respectively to Foreign Minister Anwar Gargash of the United Arab Emirates (UAE) and Minister Responsible for Foreign Affairs Yusuf bin Alawi bin Abdullah of Oman, the Simon Wiesenthal Centre Director for International relations, Dr. Shimon Samuels, called for "measures to end the hate-mongering by their most important newspapers".

Samuels pointed to "a Palestinian columnist for the London based Middle East Monitor (MEMO) Dr. Fayez Rasheed, who reportedly has a long record of incitement to violence against 'Zionists' - a euphemism for 'Jews'".

Samuels noted that "the English edition of 'Antisemitism: The Generic Hatred' was a tribute to Simon Wiesenthal's universalism.  Launched in the House of Lords in 2007, its contributors included a Rwandan, a Roma, a Disabled and a Gay spokesman, each applying the lessons in combatting antisemitism to their own victimology".

“We are outraged at the German amalgam drawn between 6 million murdered Jews of Europe and the ‘Palestinians’.”

In a letter to German Chancellor, Angela Merkel, the Simon Wiesenthal Centre’s Director for International Relations, Dr. Shimon Samuels, expressed outrage at German participation in “an amalgam drawn between the 6 million murdered Jews of Europe and the ‘Palestinians’.”

Samuels wrote “as the only Jewish Non-Governmental Organization accredited to the UNESCO World Heritage Committee (WHC), I write to you on behalf of our 400,000 members, but also for concerned Jews and Christians worldwide,” explaining that, “since November 2011, the Palestinian entry into UNESCO, with a voracious appetite for the Judeo-Christian heritage, has turned the WHC into a battlefield.”

Text of Shimon Samuels, the Centre’s Permanent Observer, presentation to the plenary of the UNESCO World Heritage Committee 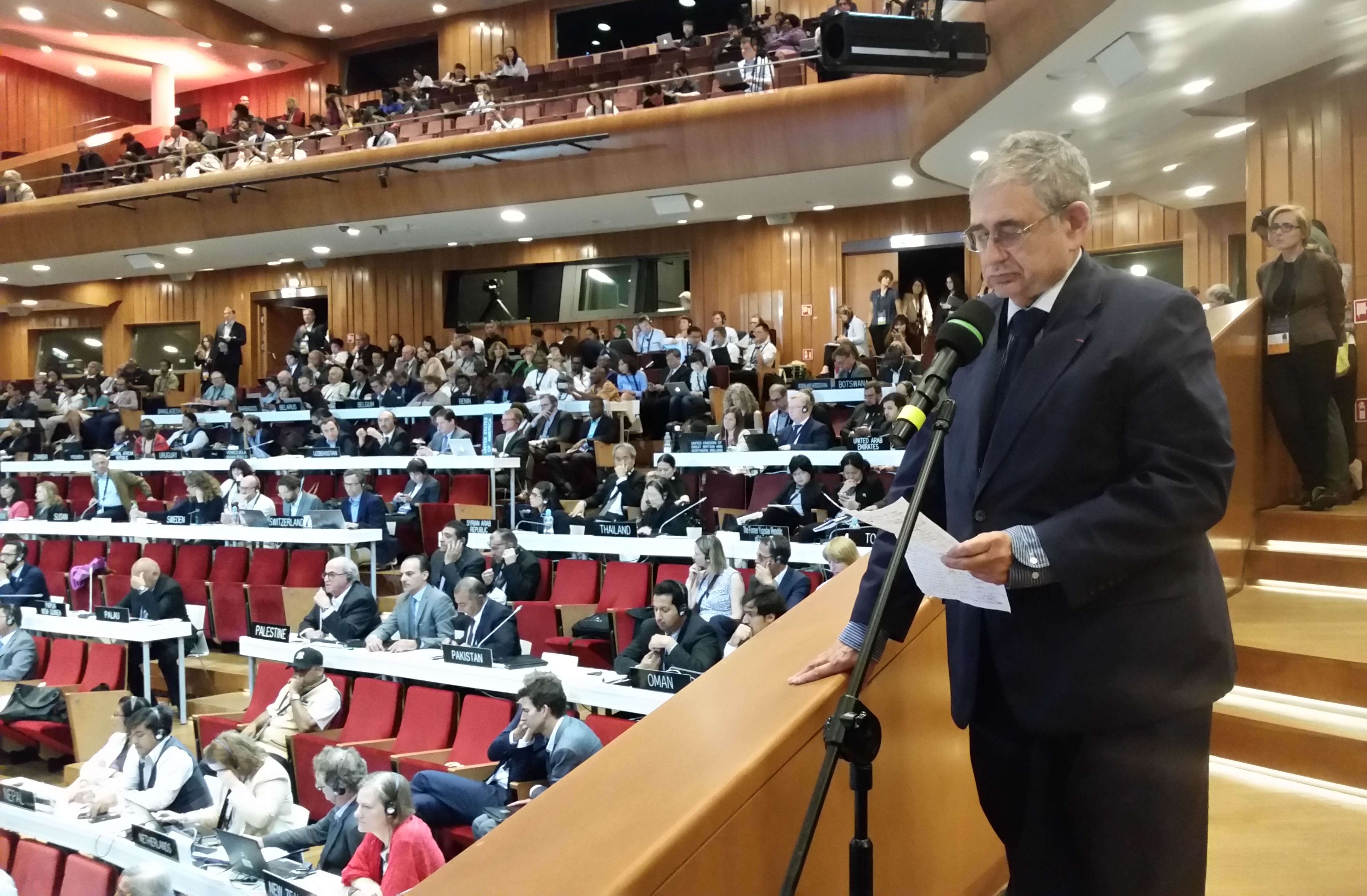 As the only Jewish NGO accredited to the UNESCO World Heritage Committee (WHC), the Simon Wiesenthal Centre speaks for its 400,000 membership and concerned Jews and Christians worldwide.

We have the greatest respect for the WHC’s work and called upon it for the protection of Auschwitz, when a discotheque was opened within its protected zone.

Unfortunately, to paraphrase the German strategist von Clausewitz’ aphorism that “diplomacy is war by other means”, since the Palestinian entry into UNESCO in November 2011, the WHC has become “heritage as war by other means!” – a veritable battlefield.

Today at the UNESCO World Heritage Committee in Cracow: "Hebron/Al Khalil Goes to Palestine" – A Report

"The Session ended with blood on its hands".

In an eerie déjà vu miasma, the identity theft scenario proceeded to its inevitable conclusion, despite the Arab/Cuban challenge to Croatia-Jamaica - Poland's demand for a secret ballad.  Hebron's destiny was sealed by 12 Yes, 3 No, and 6 Abstaining anonymous votes.

UNESCO's professional consultant, ICOMOS had expressed as to the sites Outstanding Universal Value (OUV is a WHC condition for inscription), adding that it saw "no serious new threat to the site to justify its consideration as endangered or emergency" - the fast track process always used by the Palestinians to the chagrin of other member-states waiting years to have their sites considered.

Read more: Today at the UNESCO World Heritage Committee in...