Today at the UNESCO World Heritage Committee in Cracow: "Hebron/Al Khalil Goes to Palestine" – A Report

"The Session ended with blood on its hands".

In an eerie déjà vu miasma, the identity theft scenario proceeded to its inevitable conclusion, despite the Arab/Cuban challenge to Croatia-Jamaica - Poland's demand for a secret ballad.  Hebron's destiny was sealed by 12 Yes, 3 No, and 6 Abstaining anonymous votes.

UNESCO's professional consultant, ICOMOS had expressed as to the sites Outstanding Universal Value (OUV is a WHC condition for inscription), adding that it saw "no serious new threat to the site to justify its consideration as endangered or emergency" - the fast track process always used by the Palestinians to the chagrin of other member-states waiting years to have their sites considered.

The ICOMOS paper mentioned the Old Town and other sites of religious associations [that] reflect the heritage values of Judaism, Christianity and Islam".

Kuwait claimed shamefacedly that Hebron as Palestinian heritage was a "peace measure" as the Ibrahimi mosque (the Muslim name for the Machpela Cave of the Patriarchs) was of inter-ethnic and international character.

Poland suggested that the complications of the site required a postponement for further study, as even the title of the vote was controversial: "On Emergency Basis: Hebron/Al Khalil Old Town - Palestine".

The WHC was held hostage during the ballot, Chairperson Jacek Purchla was distraught.  The Israeli Ambassador ran to protect the ballot box, security was called, the Israeli delegation walked out to boos and whistles.

The United States, Canada and Australia, speaking as observers decried the damage to UNESCO of a one-sided resolution.

Two NGO Observers were given three minutes, myself and the Mayor of Hebron, Tayseer Abu Senein who, reportedly in 1980, murdered six teenage Yeshiva students at prayer in Jerusalem.

The session ended with blood on its hands. 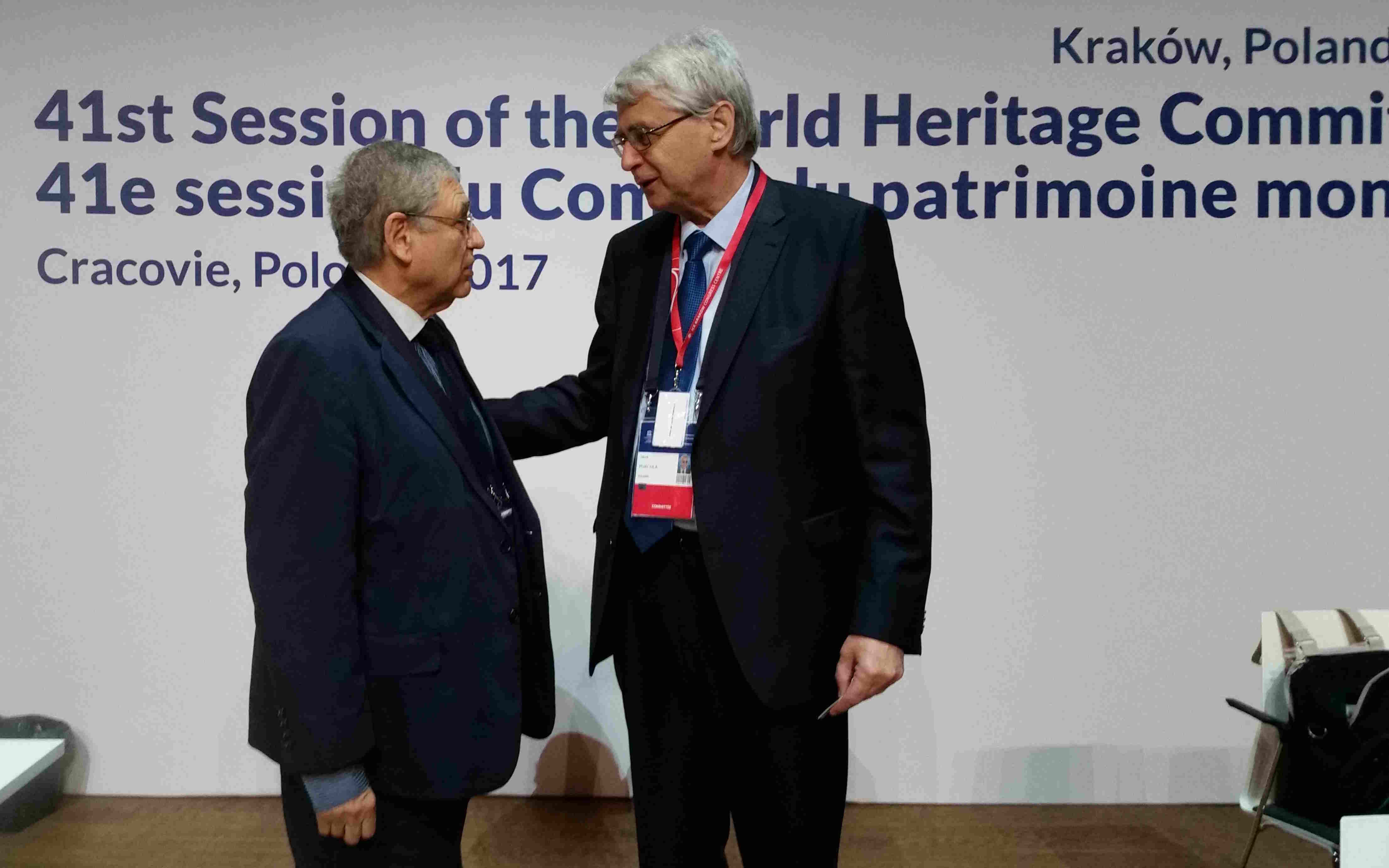 My speech follows below:

"As the only Jewish NGO accredited to the UNESCO World Heritage Committee (WHC), the Simon Wiesenthal Centre speaks for its 400,000 membership and concerned Jews and Christians worldwide. 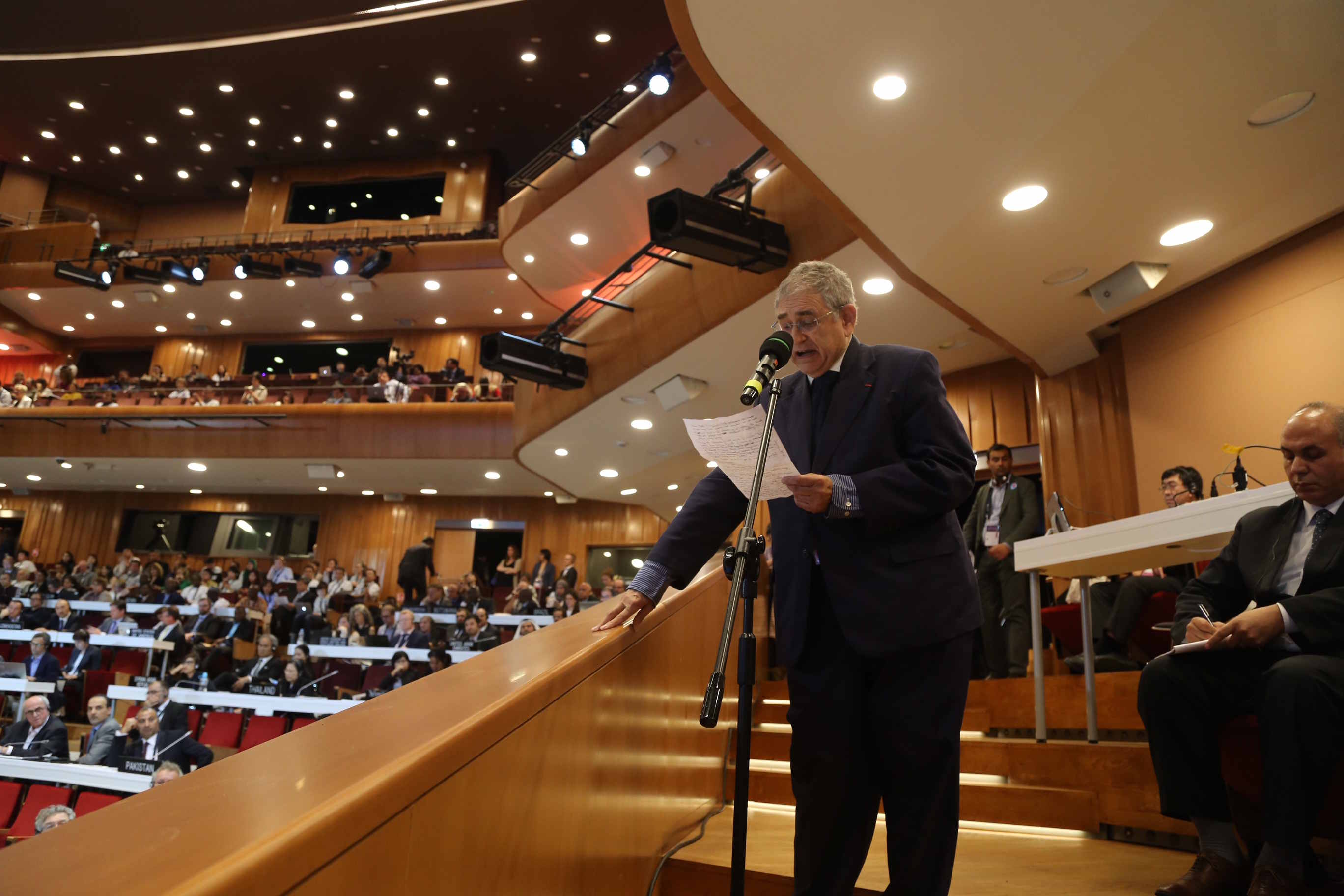 "We have the greatest respect for the WHC’s work and called upon it for the protection of Auschwitz, when a discotheque was opened within its protected zone.

"Unfortunately, to paraphrase the German strategist von Clausewitz’ aphorism that “diplomacy is war by other means”, since the Palestinian entry into UNESCO in November 2011, the WHC has become “heritage as war by other means!” – a veritable battlefield.

"From 2012 the Church of the Nativity, 2014 Battir (Beitar – the site of the Bar Kochba Jewish revolt against the Roman occupation in the year 132) to the Western Wall and the Temple Mount of Solomon, identity theft is a voracious campaign to validate a Palestinian identity.

"At this meeting in Poland, on soil soaked with Jewish blood, to witness the ravages on Jewish affinity to Jerusalem and the Cave of the Patriarchs in Hebron, could only be matched by the temerity of an amalgam drawn, on the one hand by a moment of silence for the million Jews –  including children – gassed and shot not 70 kilometers from here in Auschwitz-Birkenau. And on the other hand, a second moment of silence in support of “the Palestinians”, many of whom rejoice at the terrorist murder of Jews today – among them children.

"To stand in silence in succession for both is a form of Holocaust revisionism, casting Israelis as Nazis, in violation of the IHRA (International Holocaust Remembrance Alliance) and the European Parliament’s Working Definition of Antisemitism, and its signatory countries – all represented here.

"Mr. Chairman, no other people or religion has been so maligned in the WHC. We would have been the first to protest were the victim have been Islamic heritage, but the Judeo-Christian heritage is continually under attack in this Chamber.

"Mr. Chairman, save the WHC from further abuse, from fast track demands based on spurious claims of emergency, while other member-states wait for years to inscribe their heritage.

"Mr. Chairman, find the means to leave this politicization to New York.

"The WHC must return to its pristine integrity – the acknowledgement, protection, preservation of heritage, in an atmosphere of peaceful dialogue – what we call Tikkun Olam – to redeem and improve the world's heritage in mutual respect for the narrative of the other.