Former Argentine Ambassador to Syria, Roberto Ahuad, has testified to the Prosecutor who replaced the murdered Alberto Nisman, to  continue investigation into his predecessor's charges.

Nisman was due to present his report to the Argentine Congress the day following his presumed assassination,in which he claimed that in January 2011 former Foreign Minister Hector Timerman met with his Iranian counterpart in Aleppo, in order to negotiate a plan to close the investigation into the AMIA Jewish Centre bombing in Buenos Aires in 1994 that left 85 dead and more than 300 wounded.

The Wiesenthal Centre noted that "it was hardly surprised by the Ambassador's revelation of Assad hosting the Aleppo meeting.

"Nevertheless, the role of mass murderer of his own people, Bashar Assad, in endorsing Iranian terror against Diaspora Jews, highlights that Jews are targets anywhere and not just Israelis...", argued Dr. Shimon Samuels, the Center´s Director for International Relations, continuing, "Foreign Minister Timerman, a longtime acquaintance, called me to deny the Aleppo meeting hours following its media exposure... in any case, shortly before his death, Nisman personally confirmed to me the details of his charges."

Dr. Ariel Gelblung, Representative of the Wiesenthal Center for Latin America, said: "We hope that Ahuad's statement will be the first in the appearance of more witnesses and of evidence to substantiate Prosecutor Nisman's denunciation."

Wiesenthal Centre to Inter-Parliamentary Union: “Warn Egyptian Parliament that its anti-Jewish Incitement Could Lead to Suspension.”

“Such Jew-hatred undermines the de facto relationship between Egypt and Israel in together confronting terrorism. It legitimates attacks on Jews and further endangers the Coptic Christians victims to continued assault.”

Referring to the IPU “as the “international organization of Parliaments,” Samuels noted its “Strategy for 2017-2021: ‘Better Parliaments, stronger democracy’ with a special focus on ‘peace-building’.”

The letter also recalled the IPU’s connection last February to claims of “demeaning the Egyptian Parliament’s image abroad,” adding that “the examples are in direct violation of encouraging ‘peace-building’, for in fomenting hatred to undermine any hope of Middle East peace.”

“Demand to Booking.com: ‘Remove Aparthaus Paradies from your Directory and explain the antisemitic cause of the removal on your website.”

“We are advising our global constituency, the broader Jewish community and their Gentile friends to blacklist this horrific hotel.”

In a letter to Swiss Justice Minister, Simonetta Sommaruga, the Simon Wiesenthal Centre Director for International Relations, Dr. Shimon Samuels, reported that the Centre’s membership was “aghast at the antisemitic signs at the Aparthaus Paradies hotel in Arosa, Grisons, that confronted on Orthodox Jewish family upon their arrival”:

- At the front porch: “To our Jewish Guests. Please take a shower before you go swimming. If you break the rules, I am forced to close the swimming pool for you. Thank you for your understanding. Ruth Thomann”

In 2014, the Jerusalem Incubator Theatre, in a maelstrom of hate, was forced to leave the Edinburgh Festival without giving even one performance.

One man, Nigel Goodrich, created the “Shalom Festival at the Edinburgh Fringe” with one main objective: “to pursue justice in allowing ‘the Incubator’ to perform.”

Despite demonstrations by pro-Palestinian hecklers held back by the police outside the premises and the consequent cost of security measures, the Shalom Festival – under the banner “Building Cultural Bridges, Celebrating Coexistence – brought together, among others, interfaith leaders, Christians United for Israel, Stand With US-UK, Israeli film screenings, theatre performances and hosted the Simon Wiesenthal Centre’s UNESCO co-sponsored exhibition “People, Book, Land: the 3,500 Year Relationship of the Jewish People with the Holy Land.” 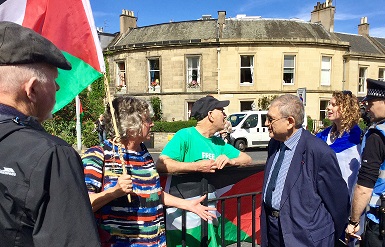 Treating the Cancer of Antisemitism’s Metastasis

Blog by Shimon Samuels posted in The Times of Israel
27 July 2017
http://blogs.timesofisrael.com/treating-the-cancer-of-antisemitisms-metastasis/

The cancer of antisemitism’s metastasis in the UK and continental Europe can only be treated by the expulsion of pro-Jihadists, antisemites and other bigots from mainstream political parties.

A 1950’s Times of London headline characterized the British post-war sense of security: “Fog over the Channel, Continent isolated…”

Despite the oncoming ‘Brexit’, the UK is an integral part of the European menacing resurgent and violent antisemitism.