“This is the first time since President Mitterrand’s 1996 call to a protest march that a French Government takes the initiative against an antisemitic epidemic.”

“After these declarations, President Macron should return the military to guard Jewish institutions and campaign to exclude extremist candidates from the May European Parliament elections.”

Last month, the Centre drew international attention to “the infiltration and hijacking of the ‘Yellow Jacket’ demonstrations across France by anti-Jewish hatemongers, attacking synagogues and Jewish stores”...

“We urge you to cleanse all Al Ahram newspapers, journals, books and websites from Jew hatred and all other prejudices.”

In a letter to the Chairman of Al Ahram, Abdel-Mohsen Salama, Wiesenthal Centre Director for International Relations, Dr. Shimon Samuels, noted that, “One of our Arab members has shared his concern that Al Ahram, considered by some as the ‘New York Times’ of Egypt, has become a mouthpiece for the denial of the Holocaust.”

Samuels quoted from the translation of an Arabic article of Al Ahram columnist, Osama Al-Alfi (full text below): “The Truth of the Holocaust,” that states, “the Holocaust is exploited by the craftiness of the world Zionist movement to achieve its interests and plans, aimed at converting Judaism from a heavenly religion to a racist doctrine, taking Palestine as the starting point for the implementation of schemes of individual domination of the world's capabilities and control of its policies.”

“On receipt of your letter, I immediately contacted the Egyptian Government on the phone and in writing to protest the presence of antisemitic materials at the Cairo International Book Fair and to demand that it take immediate action to remove the materials.”

“I also instructed my staff to close the Embassy’s booth at the CIBF, and we will not reopen.” ... “I have also brought this matter to the attention of the Department of State.”

Samuels thanked the U.S. Chargé for his immediate action, adding, “We await similar reactions, following the American example” from the French, British and Egyptian authorities.”

“United States, French and British authorities were urged to investigate Dar Al Kitab Al Arabi outlets in California, Paris and London, to ensure that the publisher’s poison does not spread or foment violence overseas, threatening Jewish communities and public order.”

In a letter to Egyptian Culture Minister, Inas Abdel-Dayem, the Simon Wiesenthal Centre Director for International Relations, Dr. Shimon Samuels, noted that she had opened the Cairo International Book Fair 2019 (CIBF) in the presence of Egyptian President, Abdel Fattah el-Sisi, with the Arab League as Guest of Honour. The Fair is due to close on 5 February

The Centre highlighted its annual monitoring of the CIBF, revealing the putrid Jew-hatred on the Egyptian stand (Hall 1, A38) Dar Al-Kitab Al Arabi (The Arab Book House). 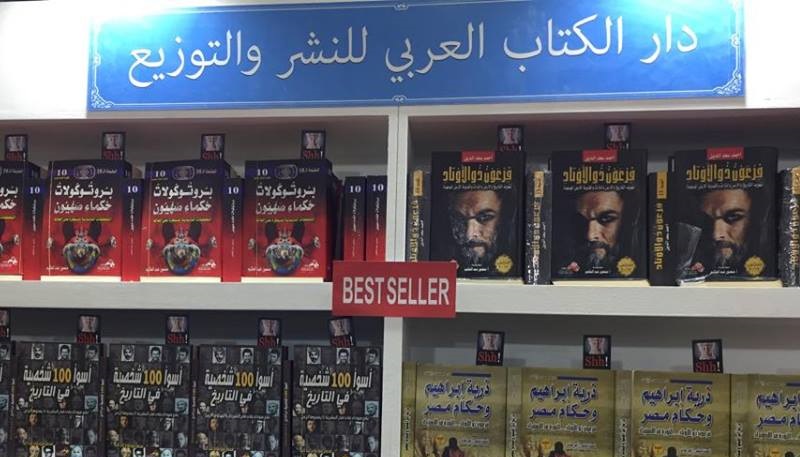 The “The Protocols of the Elders of Zion” is among the publisher's "best sellers".

Over 100 school children recounted the true stories of child deportees to Auschwitz, on the stage of a packed auditorium of the MAXXI (the Italian 21st Century Art Museum).