"Lone-wolf recruitment -  from your neighbour Norway's Breivik to Jihadi terror across Europe - all begin with the word, whether written or electronic".

In a letter to the Swedish Prime Minister, Stefan Lofven, the Simon Wiesenthal Centre's Director for International Relations, Dr. Shimon Samuels, expressed shock that "the far-right - reportedly xenophobic and antisemite magazine - Nya Tida (New Times) had been granted a stand at the Gothenburg Book Fair, to be held 22-25 September and expecting 100,000 visitors, especially youth".

"In May, 2014, we protested that the Party of the Swedes (reportedly a cover for the former National Socialist Party) were being granted access to schools as part of a civic education curriculum .  We later commended the response to our intervention: an announced ban on anti-immigrant, Roma homosexual, Muslim and Jewish incitement in schools...We have no sign that that policy was implemented,but it is certainly now contravened by the far right Book Fair Stand", stated the Centre.

Breaking news:  In response to the Centre's protest below, the legal affairs division of UEFA’s Disciplinary and Integrity Unit notified Samuels in an email that “disciplinary proceedings have been instigated against St. Etienne.”

According to UEFA, the unit will be investigating the team for four infractions — illicit banners, the blocking of stairways, the throwing of objects and the setting off of fireworks.

UEFA has a ban on political displays at games and the presence of the Palestinian flag falls under the “illicit banners” infraction. A disciplinary decision will be reached during UEFA’s Control Ethics and Disciplinary Body’s next meeting on September 22. See:

In a letter to UEFA (Union of European Football Associations) ad interim President, Angel Maria Villar Llona, the Simon Wiesenthal Centre Director for International Relations, Dr. Shimon Samuels, noted that “the Centre, has, for over twenty years, worked with UEFA against racism, how much it sympathizesin view of the recent crisis within the organization and wishes successful Presidential elections on 14 September.”

The letter stressed that “Palestinian mischief, however, seems bent – once again – on hijacking soccer for political mayhem,” continuing, “in June 2015, we were present in Zürich when Ramallah campaigned to expel Israel from FIFA. Together with a few Christian friends of Israel, we were trampled in a violent charge by 'Palestinian solidarity' hooligans.”

Wiesenthal Centre to Northern Ireland Secretary of State on the Belfast Jewish Cemetery Desecration: “The Intent that Begins in a Graveyard can Lead on to an Eventual Pogrom.”

“Jihadi atrocities are accompanied by a 'cultural cleansing’ of non-Islamic holy sites. Cemetery desecrators are similarly associates to terror.”

In a letter to the recently appointed UK Secretary of State for Northern Ireland, James Brokenshire MP, the Simon Wiesenthal Centre Director for International Relations, Dr. Shimon Samuels, argued that “Belfast – a city that has witnessed so much violence between Protestants and Catholics – is now the scene of a vicious antisemitic assault, not on live Jews but, reportedly, by a mob in a paroxysm of hate targeting their deceased families. Jewish history has learned that the intent that begins with a cemetery desecration can lead on to an eventual pogrom.”

The letter noted that “apparently the attack was premeditated, as eight youths came armed with hammers and blocks, accompanied by a crowd of racist supporters.”

The crumbling of the 2,700-year-old tomb and synagogue of the biblical prophet Nahum may be a footnote to the seething maelstrom of today’s Middle East, but it has become a football between Iraq, Kurdistan, UNESCO, Islamic State and the Chaldean Christian guardians of the site.

Located in the small town of Alqosh, Iraq, near the oil city of Mosul, in the sights of Islamic State (ISIS) terrorists a few kilometers away, it rests in the eye of a brutal, shifting sandstorm.

Outside the autonomous Kurdistan Regional Government (KRG), the area is a battleground contested between Iraqi forces, Kurdish Peshmerga irregulars and ISIS jihadists.

The KRG Ministry of Religious Affairs has a Jewish representative, whose team reported on the urgency for the tomb’s preservation, as the building could completely fall apart in a few months.

He appealed to UNESCO, arguing that the site is not only Jewish, but a part of human history.

Indeed, since the departure of Kurdish Jews to Israel in the early 1950s, the tomb’s guardians have been Chaldean Christian neighbors.The tomb has also been revered by Muslims and Yazidis.

UNESCO’s response to the KRG’s appeal emphasized that the Kurdish Regional Government was not a state.

In the cross-hairs of ISIS, the synagogue and tomb would certainly be a target for what UNESCO director-general Irina Bokova has characterized as “cultural cleansing.”

Some three years ago, a group of New York Jewish donors raised half a million dollars for the site’s refurbishment.

Unfortunately, the transfer to a Mosul bank account reportedly got lost along the way.

Of course, the prevailing chaos does not encourage accountability and the tomb’s fate, without a credible national or international effective oversight, renders dire the tomb’s fate.

Salvation would require a UNESCO mission that obtains Iraqi endorsement and protection in response to the Kurdish appeal – an initiative that would mark a meaningful triumph over ISIS and would ensure that this piece of human heritage not be marginalized or “cleansed.” 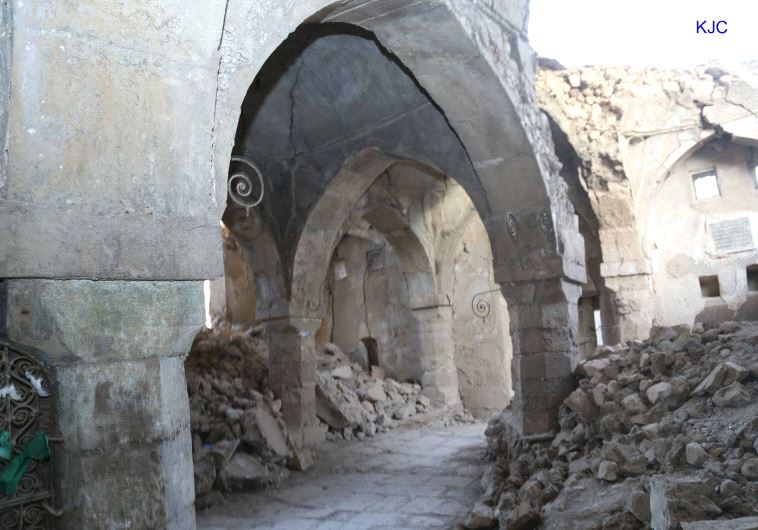 "The WSF is an agency for those who seek to inflict the greatest harm on Israel and its Jewish and Gentile supporters. For the next five days,it will abuse the hospitality of Montreal, sowing hateful repercussions in its aftermath"

In a letter to Montreal Mayor, Denis Coderre, the Simon Wiesenthal Centre's Director for International Relations Dr. Shimon Samuels, warned of "the consequences of antisemitic imagery and language pervasive throughout the World Social Forum (WSF) programme, opening tomorrow at the hospitality of his city."

Samuels, who regularly attended WSF assemblies in Porto Alegre, Brazil and Mumbai, India, explained how "this anti-globalization organisation, year after year, allowed its legitimate agenda - on behalf of victims of violence, poverty and discrimination - to be hijacked by the Palestinian cause, while ignoring constant terrorism against Jewish victims in Israel and Jewish targets in Europe and beyond".

The letter noted that "the WSF, founded in Porto Alegre in 2001, was to become the vector for the legacy of the, also 2001, Durban UN World Conference Against Racism: a campaign for the delegitimization of the Jewish State", adding that "the small Durban synagogue was for the first time in its history, besieged by Hilter-poster waving demonstrators, screaming that 'he did not finish the job' ... When the WSF came to Mumbai, the synagogue required police protection for the first time in its over 1,000 year history"