"As your official partner, we propose that the European Coalition of Cities Against Racism (ECCAR) compile and maintain a watch list of notorious racist bigots who hold municipal standing or platforms."

Paris, 25 July 2019In a letter to Benedetto Zacchiroli, President of the 158-member municipalities of the European Coalition of Cities Against Racism (ECCAR) the Simon Wiesenthal Centre Director for International Relations,Dr. Shimon Samuels, drew attention to the behaviour of Djamel Boumaaz, elected to the town council of Montpellier (Herault), reportedly on the National Rally (formerly far right National Front) ticket.

International conference on counter-terrorism to open in Buenos Aires

On the 25th anniversary of the AMIA Jewish Center bombing in Buenos Aires, Argentine President Mauricio Macri is slated to open an international conference on counter-terrorism.

However, over the proceedings looms the specter of the 86th victim, a personal friend, prosecutor Alberto Nisman, gunned down in the early morning of January 18, 2015.

That morning, Nisman was due to present findings of a lengthy investigation into the atrocity to the Argentine Congress.

"On the 25th anniversary of the Iranian controlled Hizbollah AMIA Buenos Aires Jewish Centre bombing, leaving 85 dead and over 300 wounded, both Hamas and Hizbollah  must be banned worldwide for 'warrant for genocide'. Otherwise, Islamists across Europe and the Americas will respond to the call for their Jihadist 'martyrdom'," concluded Samuels.

"Article 15 of the Hamas Charter, since its inception, has made a similar threat," noted the Centre.

“Jordanian fears of a Saudi takeover of the Custodianship for Jerusalem Holy sites, together with Palestinian suspicion of U.S. support for Riyadh, seemed to have split the UNESCO Arab group, thus permitting the so-called 'depoliticization' of the scheduled Jerusalem and Hebron resolutions – as insisted by the firm Azerbaijan Minister of Culture and Chairman of the Committee.”

“Even if non-binding and adopted without debate or vote, the very passage of these resolutions scapegoats the Jewish heritage and are an insult to the Jewish people” ... “The resolutions will reappear at the Paris meetings of the UNESCO Executive Board in October and the General Assembly in November.” 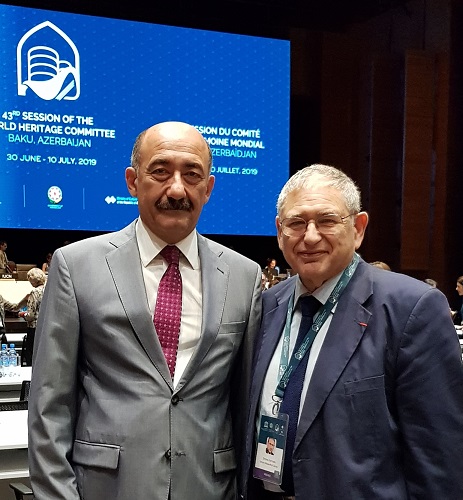 “My last intervention at the World Heritage Committee was two years ago in Crakow, when I found myself in the company of a former Mayor of Hebron. He had reportedly murdered six Talmudic students in the Cave of the Patriarchs.