“UNESCO status brought thousands of tourists to the Carnival. Delisting is no guarantee for a hate-free Aalst Carnival... We will be monitoring and,if necessary, take measures to inform our worldwide membership and other friends of the dangers in visiting a hatefest.”

The Simon Wiesenthal Centre Director for International Relations, Dr. Shimon Samuels, commended the UNESCO Intangible Cultural Heritage of Humanity Committee for its denunciation of antisemitism in setting the precedent for delisting one of its members, the Belgian town of Aalst. Its Carnival had received the prestigious UNESCO status in 2010.

In 2013, our Centre protested a float of “SS uniformed” celebrants whipping “concentration camp prisoners” bearing cannisters marked “Zyklon B,”  the gas that murdered millions in Auschwitz and other death camps. 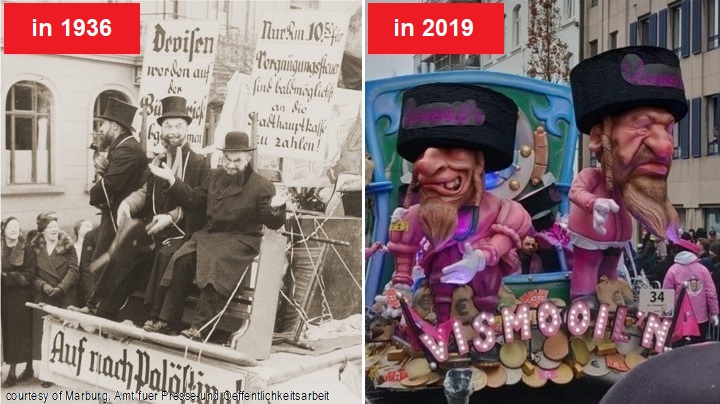 Samuels was present at the Paris meeting of the Intangible Heritage Bureau in June, and, once again in October, protested Aalst organizers’ antisemitic stickers and ribbons showing stereotyped Jews wearing the “kippa,” jumping on the logo of UNESCO, suggesting that this UN agency was under Jewish control. These images patently set the theme for the 2020 Carnival.

The stickers and ribbons planned for the 2020 Aalst Carnival.

The Centre thanked the UNESCO Secretariat represented by Ernesto Ottone, Assistant UNESCO Director‐General for Culture, the Committee Chair and Host, Colombia, as also the states that lobbied for “delistment,” including Austria, the Philippines and Poland. The 24 voting states agreed to the measure by consensus, without need for a ballot.

Unfortunately, Belgium and its civil liberties NGO, UNIA, remained unhelpful in their defence of “freedom of expression,” even when serving as camouflage for racism.

The UNESCO Committee understood clearly that racism was a violation of its objectives, thus permitting the precedent of delistment.

Our Centre also congratulates its partners in this process, the United Kingdom Lawyers for Israel (UKLFI) and the Brussels-based IMPAC, that brought a 22,500 signature petition against Aalst’s antisemitism to the Committee meeting in Bogotà.

Samuels emphasized that “delistment was not a guarantee for a hate-free Aalst Carnival,” adding, “UNESCO status brought thousands of tourists to the Carnival... Our Centre will be monitoring and, if necessary, will take measures to inform our over 400,000 members and other friends worldwide of the dangers in visiting a hatefest,” concluded Samuels.

Further to a proposal submitted by the Secretariat of UNESCO, the Committee based its decision on the fact that systematic recurrences of racist and antisemitic representations is incompatible with the fundamental principles of the 2003 Convention for the Safeguarding of the Intangible Cultural Heritage, notably its 2nd Article which stipulates that “consideration will be given solely to such intangible cultural heritage as is compatible with existing international human rights instruments, as well as with the requirements of mutual respect among communities, groups and individuals…”

UNESCO stands by its founding principles of dignity, equality and mutual respect among peoples and condemns all forms of racism, antisemitism and xenophobia.