"First my thanks to Russian Jewish Congress President, Mr.Yuri Kanner and his team, for organizing this 2nd Moscow Conference “Protecting Future: Combating Antisemitism, Xenophobia and Racism”. It is a great honour to serve as co-moderator of this Opening Session and to introduce the international speakers." 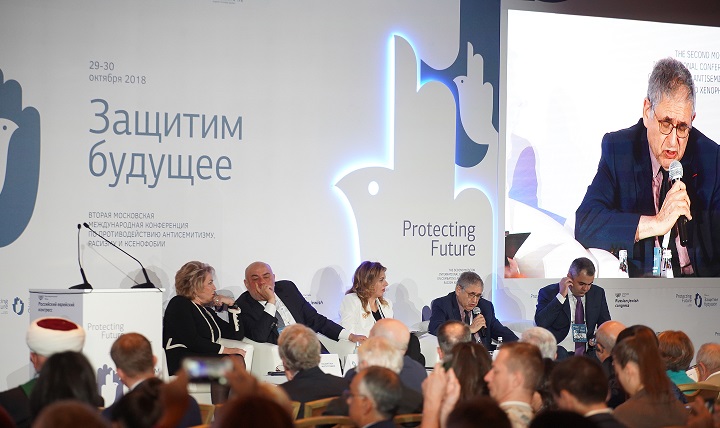 In a letter to King Abdallah of Jordan, the Simon Wiesenthal Centre Director for International Relations, Dr. Shimon Samuels, denounced “demands by Fatah-affiliated officials for the King to coordinate with the Palestinian President, to oblige Israel to implement a UNESCO resolution on Jerusalem.”,

“Your Majesty, we recall your hospitality to our Centre’s delegation in Amman, just as granted to us by your late father, King Hussein (r.i.p.), to celebrate the signing of peace between the Hashemite Kingdom and the State of Israel,” noted Samuels, continuing, “In your capacity as ‘Custodian of Jerusalem’s Muslim and Christian holy sites’, we value your recognition of the city’s sanctity to all three monotheistic religions, especially Judaism. This is also the position of Israel.”

The Centre added: “you are, of course, aware that one of your petitioners, Hassan Issa, Secretary General of a Muslim-Christian Committee, is well-known for his antisemitic campaigns to ‘de-Judaize’ the Holy City, to the point of denying Jewish affinity to the Western Wall”...

“Issa claims that the latest UNESCO resolution on Jerusalem, two weeks ago in Paris, ‘reaffirmed that ‘legislative and administrative measures and actions taken by Israel, the occupying power, which have altered or purport to alter the character and status of the Holy City of Jerusalem... are null and void and must be rescinded forthwith'.”

Samuels argued: “Your Majesty - following the goodwill depoliticization lead of UNESCO Director-General, Audrey Azoulay - Jordan, Israel and the Palestinians agreed to a consensus in the cause of the said Executive Board resolution. Indeed, I was present in the Chamber and witnessed  that the resolution was not submitted to a vote and was ensconced in a non-binding, non-referential Annex.”

The Palestinian initiative is no more than a mischevous breach of faith to undermine the Director-General and trap Your Majesty in a stratagem to tarnish the good faith of Jordan... Our Centre urges Your Majesty to resist this provocation and consign their demand to oblivion,” concluded Samuels.

The Wiesenthal Centre expresses its horror and revulsion at the presumed gruesome murder of journalist Jamal Kashoggi. In a search, however, of his official Twitter account, Simon Wiesenthal Centre Director for International Relations, Dr. Shimon Samuels, discovered the following tweets of 16 October 2015.

FROM JAMAL KHASHOGGI: The Tomb of the Prophet Joseph, attacked by demonstrators yesterday in Nablus is a Jewish lie is a shrine built in the Turkish era and surrounded by Jews to the school of extremism and claimed that Joseph peace be upon him.

FROM JAMAL KHASHOGGI:The Jews have no history in Palestine, so they invented the wall of the prophet, a Mamluk building. After 67 they noticed the tomb of Joseph in Nablus, and they decided that he was the prophet of Joseph.

FROM JAWAD AL-HASHEMI: Jews without history in Palestine !!! The feeling is that our teacher knows that you have come to history like my knowledge of Korean !!! Best greeting !!

FROM JAMAL KHASHOGGI: Go and dig with them, Jawad al-Hashemi, perhaps you will find them a tomb or an effect to be blessed with it, they have dug long and wide and did not find anything, so you have experience.

RESPONSE FROM JAWAD AL-HASHEMI: For your knowledge, we, the Muslims, took us from the Jews to the name of Jerusalem, they called Jerusalem the name of the house of Hamei Kadesh, and we stole it and called it Beit-al-Maqdis.

FROM JAMAL KHASHOGGI: A flaw ... The Muslims did not steal anything from the Jews, and I think you are a Muslim who cherishes your identity, do not provoke me more than this.

RESPONSE FROM YAZEED1404 (speaking of Jawad al-Hashemi): Professor Jamal, your guest is Jewish.

FROM JAMAL KHASHOGGI: @JawadAlhashimy is not a Jew but an Iraqi "diplomat" in New York.

As an international human rights organization, the Simon Wiesenthal Centre is anxious that the truth of Mr. Khashoggi's fate is uncovered and accounted for.

For the 16th year, the Simon Wiesenthal Centre is the only non-governmental organization to monitor incitement to hate and violence on the display stands of the Frankfurt Book Fair (FBF).

Depoliticization at UNESCO - For the United States and Israel, Too Little, Too Late!

“Former Israeli heritage issues now become the responsibility of accredited Jewish organizations and the defence of Judaism itself.”

Tomorrow morning Paris time, a senior UNESCO official will present to the 205th Executive Board of 59 voting States and Observers the two notorious anti-Israel resolutions that, normally, pass with an assured majority vote.

Item 28: Occupied Palestine and the Old City of Jerusalem and its Walls
Item 29: Education and Cultural Institutions in the Occupied Arab Territories and Occupied Syrian Golan.

Read more: Depoliticization at UNESCO - For the United...