As the 42nd UNESCO World Heritage Committee concludes its ten days of proceedings, the Director-General’s policy of depoliticization - pointedly regarding the Arab-Israel issue - seemed to have faded into the Bahrain desert sunset of consensus and harmony.

The Jerusalem debate was not resolved, but postponed, but for two blips:

- The Wiesenthal Centre had drawn attention to the interview granted to the Gulf Times by the Palestinian delegate, performing a litany of anti-Israel recriminations before the ink on the consensus resolution had began to dry [see picture below]. 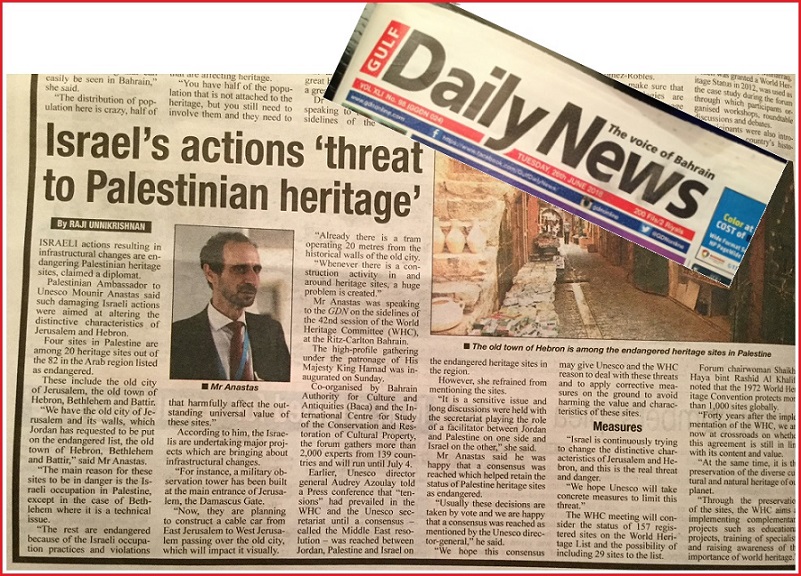 - More disturbing, however, was the missive sent by Morocco to all UNESCO delegations: the speech of King Mohammed VI, as Chair of the Council of Al-Quds (viz. no mention of its universal name, Jerusalem) meeting in Rabat.

The King’s speech is a critique of the American Embassy’s move, a mild rebuke of Palestinian immobilism, offset by a litany of critiques against Israel [see in attachment original document in Arabic, Spanish, English and French].

One may speculate the intent of Morocco in repoliticizing and, thereby, undermining the policy of a Director-General with family ties to the Moroccan monarchy.

Was it a bid for recognition as a player in Arab “Jerusalem politics,” in the rivalry between the kings of Jordan and Morocco, or the ill-considered decision of an official in the Moroccan delegation to UNESCO in Paris?

In sum, these steps indicate the challenges confronting Madam Azoulay and how laudable her efforts are to contain depoliticization across the board.