This university Holocaust essay competition programme, co-organized by the Simon Wiesenthal Centre-Europe, (CSW), the Association Verbe et Lumière-Vigilance (VL-V) and the Russian Holocaust Centre (RHC),each year. invites to Paris the five student winners from across the former Soviet. Union, to present their research findings at UNESCO.

The 2014 laureates from Moscow, St. Petersburg and Orel in Russia and Vitebsk in Belarus were chosen from almost 3,000 submissions

Attended by the Delegations of Russia, Belarus, Canada, Germany and Israel, the proceedings were opened by Genc Seiti, Director of the UNESCO Division for National Commissions and Civil Society. He commended the laureates' initiative for, not only keeping alive the memory of the Holocaust in Russia, but contributing to respect, tolerance and human rights worldwide.

UNESCO Director General, Irina Bokova described the programme as “becoming a tradition with a contemporary meaning” emphasizing that “commemorating the Holocaust is not just about the past but about human dignity in the present and countering all - including subtle -  forms of antisemitism.

Roger Cukierman, President of the Council of Jewish Institutions in France (CRIF), spoke of his family’s fate in Treblinka, adding “for Jews memory is a duty. For UNESCO it is a defence of human values.  Europe, where the Holocaust took place is where antisemitism is now flourishing.  The extreme left promoters of “BDS” are de facto antisemites,as  the boycott is not against China, Russian, Qatar – only against Israel... Several thousand French Muslims have converted to Jihadism.  These are ticking bombs that will target Jews, but not just Jews.”

a)    As we pass from eye witnesses to pages of history, memory must become vigilance against any germ of totalitarianism

b)   Attention to the traumas of the grandchildren of survivors,in providing a service to repair.

c)    Edmond Fleg’s definition of “I am a Jew” as a route map taking the memory of the past into a promise for the future.

Dr. Ilya Altman, RHC Chair, spoke of the universal applicability of Holocaust research ”why, otherwise would French intellectuals, journalists and politicians have come to UNESCO to hear Russian papers over the past ten years?”  He noted that “each year, the laureates are judged and chosen by the previous winners under the title: Holocaust Memory as the Road to Tolerance”.  He viewed his work as a paradigm reflected in the forthcoming 10th Anniversary of the Beslan School siege in North Ossetia: “the murder of children anywhere is too redolent of the Holocaust”

Altman then introduced the laureates, who each presented an abstract of their paper:

- Yuliya Bakhir, Vitebsk, Belarus, on “Historiography of the Holocaust in Belarus”

- Yuliia Fastovskaya, Moscow State Humanitarian University, on “The Elimination of the Intellectual Elite of Soviet Society during the Holocaust – The Example of Psychiatrist Sabina Spielrein” 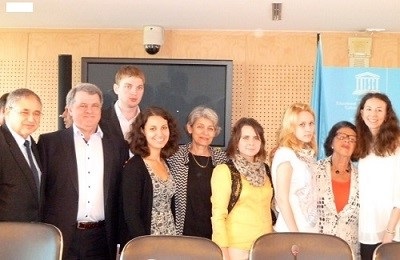 Alla Gerber, President of the Russian Holocaust Centre (RHC) and Member of the Duma Parliamentary Special Chamber, pointed to political parties that "include the words, Russian, Slavic or Motherland in their name,who promote xenophobia, whether against blacks, yellows or the different,all have antisemitism at their base.  Openly Nazi parties have appeared.  Last year 27 people were killed, 178 wounded, 94 threatened from different national groups in the Russian Federation... This project has brought us a gift of so many young non-Jews working with us on Holocaust memory!”

Verbe et Lumière – Vigilance, Lithuanian-born child survivor, Alexandre Kaplan, told of his work in post-Soviet Lithuania, where the Holocaust is distorted or unknown.

Centre Simon Wiesenthal-France President Richard Odier, thanked UNESCO’s Director-General for her support in the fight for memory and against antisemitism, calling on the laureates to “be active against today’s genocide in Sudan and atrocities in Nigeria and to add the three assassinated young Israelis to the casebook.”

The Centre’s Director for International Relations, Dr. Shimon Samuels, thanked UNESCO and Special Advisor Dr. Graciela Samuels for conceiving this event. He added that “our first meeting in 2004 was based on 27 essays. This is our 10th, for which we received almost 3,000. Therefore we have 50 winners chosen from over 11,000 essays”.

He proposed that “UNESCO publish the 50 papers together with messages from the keynote speakers of each annual session”.  The Director General encouraged the editing of such a volume.

Samuels concluded in congratulating Alla Gerber and Ilya Altman for “creating a new generation across the former Soviet Union of some 11,000 messengers and militants for tolerance and multipliers against extremism.  May their efforts grow exponentially from year to year.”