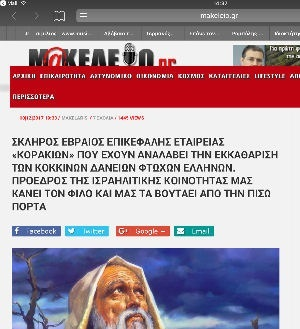 The letter warned that, “Such incitement engenders an atmosphere encouraging such acts as the Christmas “paint-bomb” attack on the Israeli Embassy in Athens by a reportedly extreme left group calling itself Rubicon.”

The Centre noted its “reporting on antisemitic articles in Greek media 15 years ago, especially in the mainstream daily, Eleftherotypia, such as:

- its review of the notorious antisemitic forgery ‘The Protocols of the Elders of Zion’ as ‘historically accurate’;

- its description of noisy gatherings as ‘Havra Iudaion’ (a ‘cabal of Jews’);

- its comments on terrorist atrocities in Spain: ‘The Christian Fascist fundamentalists in coalition with the most extreme international Zionists who govern America’...”

Samuels reminded that, “these examples justified the Wiesenthal Centre’s travel advisory against visiting Greece in December 2003.”

The letter insisted that: “the media must be advised that their incitement makes them complicit in the consequences...” and that “the Police must be investigated for their dereliction of duty to defend the security of the Israeli Embassy. This time it was ‘paint-bombs’, next could be explosives...” continuing, “the attackers took the name ‘Rubicon’, with reference to Julius Caesar’s crossing of the Rubicon river, a phrase today meaning ‘passing a point of no return’.”

“In the absence of governmental measures, our Centre must consider reactivating its Travel Warning Advisory to ensure that the Jewish condition in Greece does not cross the Rubicon,” concluded Samuels.