Rejecting IHRA antisemitism definition is a return to dark past - opinion

An open letter to the mayor of Strasbourg, France, which is the only city to reject IHRA antisemitism definition on “anti-Zionist” grounds. 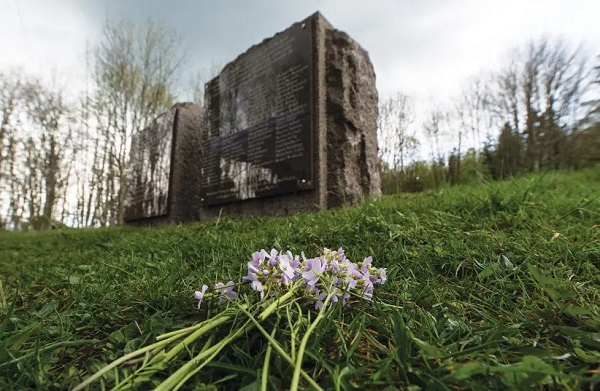 Flowers are placed near memorials where the gas chamber once stood, at the Natzweiler-Struthof
concentration camp in Natzweiler, France, in 2015. Photo Patrick Seeger/Reuters

Madame Mayor Jeanne Barseghian, in representing the Green Party (EELV), you must be sensitive to the environment. You would thus be aware of the Natzweiler-Struthof camp nearby, where in 1943, a gas chamber was built for 80 Jewish prisoners at the request of Strasbourg’s University Institute of Anatomy. Their skeletons were to be used to prove “Jewish racial inferiority.” This example of antisemitism should be sufficient evidence of historic environmental poisoning.

Strasbourg, in recent months, has borne the brunt of renewed Jew-hatred against both the living and the dead, the latter in the spate of cemetery desecrations. Its primary antidote is the IHRA (International Holocaust Remembrance Alliance) definition of antisemitism, adopted by over 30 member-states of the Council of Europe based in Strasbourg, as by the French National Assembly, NGOs, Municipalities, Universities and other institutions.

Strasbourg is apparently the only city to reject it on “anti-Zionist” grounds.

Madame Mayor, for over 2,000 years since their expulsion, Jews have prayed in the direction of Zion, the heart of Jerusalem.

In 1788, the Abbé Henri Grégoire led two campaigns: the abolition of slavery and the emancipation of the Jews. His essay, “The Regeneration of the Jews,” addressed the protection of the Jewish communities during the most violent moments of the French Revolution. He then became an adviser to the Jewish deputies of the Sanhedrin, created by Napoleon. The Abbé was also interested in the Jewish unbroken link to the Holy Land and was, perhaps, the first French Zionist.

The Napoleonic wars brought the French Army to break down ghetto gates across Europe. On arrival in the Land of Israel, Napoleon published a manifesto granting the Jews an independent state in their homeland under French suzerainty. The idea was dashed by his military defeat.

The practical movement to reestablish Jewish sovereignty was the direct response by journalist Theodor Herzl’s Zionist Congress to French antisemitism, generated by the Alfred Dreyfus affair.

President Emmanuel Macron has called “anti-Zionism” a “reinvention of antisemitism.”

In 2001, former German foreign minister Joshka Fischer, member of the Green Party, told the Wiesenthal Center, “Anti-Zionism inevitably leads to antisemitism.” In 2015, a court in Essen, Germany, ruled that “Zionist in the language of antisemites is a code word for Jew.”

In 2014, I was present in the Paris mass marches against Israel to the screams of “Mort aux Juifs!” (“Death to the Jews!”). Pro-Palestinian demonstrators had the right to march, but not to peel off to attack synagogues and Jewish institutions.

The BDS (Boycott, Divestment and Sanctions against Israel) campaign, though illegal in France, is rife and reminiscent of the 1930s Nazi German “Kauft nicht bei Juden” (“Buy not from the Jews”) and the smashing of Jewish stores, just as the Islamist terrorist murders of French Jews in the Hypercacher kosher supermarket was the apogee of anti-Zionist antisemitism.

In 2015, our center stressed that “virulent anti-Zionism is often a thinly veiled disguise for virulent antisemitism.”

Madame Mayor, anti-Zionism certainly becomes antisemitism when it is only the Jewish people who are denied self-determination.

More than 20% of Israeli citizens are Israeli-Arab-Palestinian. They do not identify as Zionists. Yet they vote in general elections and are represented in the Knesset. The Palestinians could have enjoyed peaceful self-determination by accepting the 1947 UN Partition resolution. The Arab world preferred to go to war. Since then, they have refused every opportunity, from the Oslo agreements to the present. They have preferred to deny Jewish sovereignty as their neighbor and demonized the meaning of Zionism.

Whether neo-Nazi, extreme Left or Islamist, all are brought together in a pandemic of antisemitic anti-Zionism.

Madame Mayor, your council’s decision to reject the IHRA definition of antisemitism on grounds of anti-Zionism, could be perceived in itself as antisemitic. It is certainly out of place in Strasbourg.

We urge you to rethink the decision, if only to defend the Strasbourgeois Jewish community, possibly endangered by an egregious situation. Acceptance of the definition may also help to cleanse a poisoned environment.

The author is director for international relations of the Simon Wiesenthal Center.