Our 2021 “Worst Offender Awardee” goes to Syria and "Runner-Up" to Qatar for recidivist antisemitic conspiracy theory titles in their catalogues...

The Simon Wiesenthal Centre is, for the 19th year, the only non-governmental organization to monitor texts of hate and violence on the stands of problematic publishers at the Frankfurt Buchmesse (FBM) – “The Olympics of Book Fairs”.

A hybrid Fair this year due to the Pandemic, almost 2,000 publishers, including electronic participation, represented some 70 countries, bent on sales contracts.

The Centre’s Director for International Relations, Dr. Shimon Samuels, announced at the Book Fair’s closure that, “Our 2021 ‘Worst Offender Awardee’ goes to Syria and ‘Runner-Up’ to Qatar for recidivist antisemitic conspiracy theory titles in their catalogues.”

Syria is represented by its own stand, but also through Qatar and Egypt. 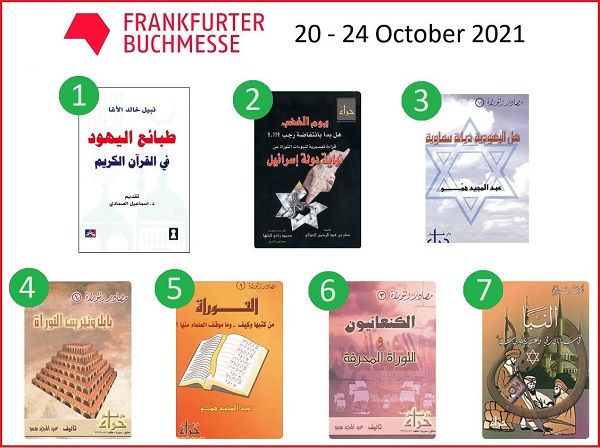 1 - The Nature of Jews in the Quran, by Nabil Khalid El Agha
(Jews despise and plot against Muslims, Jewish religious texts are corrupt)

A detailed synopsis of the book from Qatar's Al-Watan newspaper:
https://www.al-watan.com/news-details/id/50368

2 - The Day of Wrath, by Safar bin Abdul-Rahman al-Hawali
In the year 2000, al-Hawali wrote a treatise on the Second Intifada, entitled “The Day of Wrath”. He argued that the Biblical prophecies used by Christian fundamentalists to support the state of Israel actually predict its destruction.

3 - Is Judaism a Heavenly Religion?, by Abdul Majeed Hamo

4 - Babylon and the distortion of the Torah, by Abdul Majeed Hamo

5 - Babylon and the distortion of the Torah volume 2, by Abdul Majeed Hamo

6 - The Canaanites and the Distorted Torah, by Abdul Majeed Hamo

7 - The Message in Sabbatai Zevi and Abdullah ibn Saba, by Ahmed Mahmoud Al-Shorbaji

The Abraham Accords have, so far, cleansed the shelves of the United Arab Emirates, Bahrain, Morocco stands.

By the same token, Syria, Egypt (though at peace with Israel), Lebanon, Iraq etc. have regular displays of antisemitica.

Our findings have led to the Frankfurt Book Fair blacklisting of recidivist publishers of hate.

We will continue to monitor the shelves as hate mongering contravenes the contractual obligations of publishers towards the Fair.

“We hope to see the day that the Fair will be declared hate-free,” concluded Samuels.