Collectif Palestine Vaincra, on Twitter, celebrates terrorist actions by the PLFP (Popular Front for the Liberation of Palestine), the LARF (Lebanese Armed Revolutionary Factions), and others’ attacks, including assassinations, bombings and airplane hijackings. 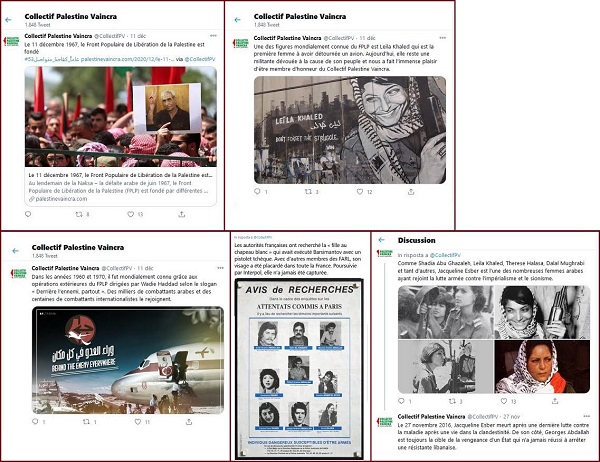 In recent tweets, the Collectif glorifies murderers such as:

- Jacqueline Esber: involved in the 1982 assassination of an Israeli diplomat in Paris – though wanted by Interpol, she was sheltered in Lebanon until her death in 2016;

- Dalal Mughrabi: involved in the 1978 “coastal road massacre,” leaving 38 dead, including 13 children – she was qualified as a terrorist by the UN;

- Leila Khaled – involved in two hijackings (TWA in 1969, El Al in 1970) –, captured, condemned and jailed, she was released in exchange for civilian hostages kidnapped by other PFLP members...

Samuels stressed that “Collectif Palestine Vaincra hacked JCDecaux billboards to display the map of Israel covered in blood and to promote their boycott campaign against Puma and Israel. We contacted JCDecaux again to inform them of a further hijacking of their advertisement infrastructure. This material should support JCDecaux legal action against the Collectif.”

The Centre repeated its proposal for both Puma and JCDecaux, “to adopt the IHRA Definition of antisemitism, which would be a clear message to the Collectif and other hatemongers, to desist from their abuse of the good name of your respective companies.”