“Join us in calling for the expulsion of the Palestine Football Association from FIFA, in view of its stadiums, teams and tournaments dedicated to glorify the names of terrorists.” 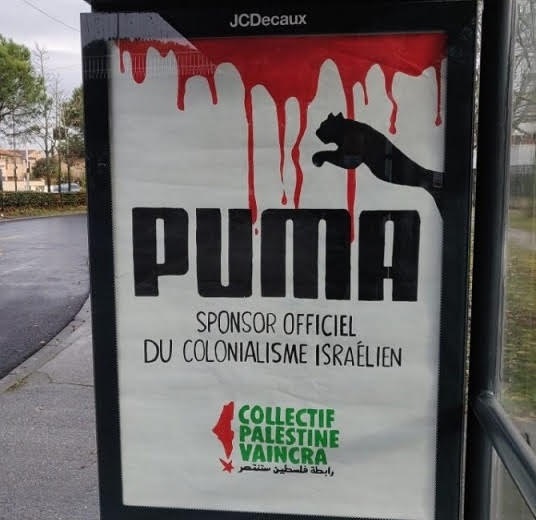 The letter noted that, “these posters, labelled by the so-called ‘Collectif Palestine Vaincra’ (the ‘Association Palestine Will Vanquish’), appear predominantly in Toulouse.”

Samuels claimed that, “It was such exhibitions of hate that incited to a Jihadi killing spree by Mohammed Merah, who, in March 2012, murdered a Rabbi teacher, his two sons and an 8-year-old girl, in the Toulouse Otzar Hatorah Jewish school. The perpetrator claimed his brutal act was: ‘vengeance for Palestinian brothers and sisters’.”

The Centre stated: “Our partner organization, the BNVCA (National Bureau for Vigilance Against Antisemitism) will take legal action against the ‘Collectif Palestine Vaincra’ and JCDecaux, the company providing the poster billboards.”

“We are aware of Puma’s sponsorship of the Israel Football Association (IFA), from our ‘Eleven Points Against Racism in Football’ campaign with UEFA and FIFA... The Toulouse-based ‘Collectif Palestine Vaincra’ has no concern for football. Its logo bears the map of Israel in blood red, taken over by ‘Palestine’ as on the poster,” argued Samuels.

The Centre urged Puma “to take appropriate measures with the French authorities against this blood libel.”

“Join us also in calling for the expulsion of the Palestine Football Association from FIFA, in view of its stadiums, teams and tournaments dedicated to glorify the names of terrorists,” concluded Samuels.