Since March 2018, the Argentine Atlantic seaside resort, Mar del Plata, has been the site of first public trial against a Neo-Nazi group.

Their members had met to “hunt” down their targets, among them immigrants, homosexuals, or those whom they considered racially inferior. Physical assaults were accompanied by vandalism.

The Prosecutor had tried to negotiate with the accused to accept a minor penalty without imprisonment, by removing accusations of conspiracy and other violations of criminal law.

The Wiesenthal Centre led the charge against such accommodation in a public campaign to convince the judges not to yield to the Prosecutor and to impose an appropriate jail sentence.

Yesterday, the Court ruled that six of the defendants serve between 4 and 9 years in prison.

The judges argued that “if ideas are allowed to be imposed by force or fear, citizens could not feel themselves protected by a minimum of security.”

“Latin America may eventually provide a new jurisprudence for democracies in Europe and beyond in the aftermath of its totalitarian military regimes. This trial is a mirror reflecting the defense of the republic,” said Dr. Ariel Gelblung, Representative of the Wiesenthal Center for Latin America.

The Centre’s Director for International Relations, Dr. Shimon Samuels, emphasized that “Argentina, the country that – at the end of World War II – received the most Nazi war criminals, cannot afford leniency to neo-Nazis. Our Centre is proud of its role in this landmark case and will be vigilant in monitoring all future such dangers to democracy.”

Wiesenthal Centre to UNESCO Director-General: “When Palestinian President Denies the Holocaust, Where is UNESCO?”

"As the only UN Agency with a special mandate for the protection of the integrity of the Holocaust, it is obligated to speak out and condemn Abbas for his desecration of the victims.”

In a letter to UNESCO Director-General, Audrey Azoulay, the Simon Wiesenthal Centre Director for International Relations, Dr. Shimon Samuels, stressed that “UNESCO is the only UN Agency with a special mandate for the protection of the integrity of the Holocaustits commemoration and education.”

Samuels lamented, “Yet, our constituency, especially in Europe, is asking one question: ‘Where is UNESCO when Mahmoud Abbas, Palestinian President - in an address to the Palestinian National Council in Ramallah - launched an antisemitic tirade desecrating the memory of the Holocaust and its victims?’"

The letter noted that, “Abbas’ lesson in Holocaust denial has been deemed unacceptable by the European Union, but where is UNESCO?”

“Of the sixteen Steering Committee members, 14 voted for, 2 abstained.”

The UNESCO-affiliated network of 150 European municipalities, ECCAR (European Coalition of Cities Against Racism), founded in 2004, at its annual Assembly in Liège, Belgium, today admitted its first two Israeli members. Of those present and voting members of the Steering Committee, 14 approved and two abstained.

Update: as a result of our press release below, Sao Paolo Governor, Marcio França, has apologized for his reception of the reported “Ambassador of Hezbollah in Brazil” and will attend the 24th Commemoration Ceremony of the AMIA bombing on 18 July in Buenos Aires. We suggest that Brazilian President Michel Temer similarly express regret for his welcome to the Iranian Foreign Minister.

“Brazilian officials claim legitimate commerce in a culture of corruption.”

“At the same time as former President and Brazilian national hero, Lula, was sent to jail for corruption and Hezbollah was drug running and money-laundering across the Brazil borders with Argentina and Paraguay (the lawless Triple Frontier), President Michel Temer gave a state welcome to Iranian Foreign Minister, Mohammad Zarif, in Brasilia,” noted Simon Wiesenthal Centre Director for International Relations, Dr. Shimon Samuels.

“Lazio Football Club positive measures have been ineffective against recidivist hate fans... innovative face recognition technology, like for biometric passports, must be employed at stadium gates.”

In a letter to UEFA President, Aleksander Ceferin, Simon Wiesenthal Centre Director for International Relations, Dr. Shimon Samuels, highlighted “the many years that the Centre has been monitoring antisemitism and other forms of hatred on the football terraces in cooperation with UEFA.”

Samuels recalled how “last October, S.S. Lazio football club abused the tragedy of Anne Frank (photo), the Dutch diarist of the Holocaust for an antisemitic attack against the A.S. Roma team, with which they share the same stadium.” 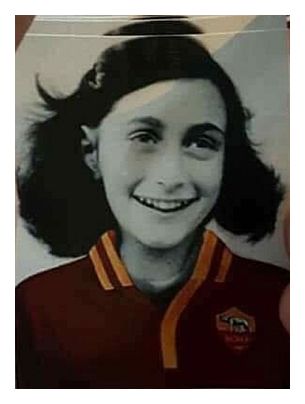