From Evian to Kristallnacht to the Holocaust

“The Dominican Republic and Sosúa were one of the few lights in the darkness...

It offsets the shameful behaviour of Cuba in refusing to accept its own entry visas issued by their Consuls to Jews...
These are lessons for immigration policies of today...”

In 1938, U.S. President Franklin Delano Roosevelt called for a conference on the fate of Jewish refugees fleeing Nazi Germany, to be held at the League of Nations in Geneva, the City of Diplomacy.

Switzerland refused to host the meeting on grounds of its policy of neutrality. It was thus moved across the lake to the French spa resort of Evian-les-Bains.

Director for International Relations of the Simon Wiesenthal Centre in Paris, Shimon Samuels, argued: “Evian was the green light given to Hitler to commit genocide.”

The inauguration of a plaque on Friday, "Kristallnacht", at Evian, presents the conference of 1938 as “a lesson for the entire world.”

Samuels highlighted "the Dominican Republic’s offer to take 100,000 Jewish refugees, if bachelors and farmers. There were not many Jewish farmers in Germany, but some 5,000 were sent by boat to the Caribbean island. There they built a small town, Sosúa. Jews still live there and two were present in Evian [at the plaque ceremony] on Friday." (from the Swiss newspaper, Le Temps: <https://www.letemps.ch/monde/illuminer-synagogues-mieux-conjurer-lobscurantisme>) 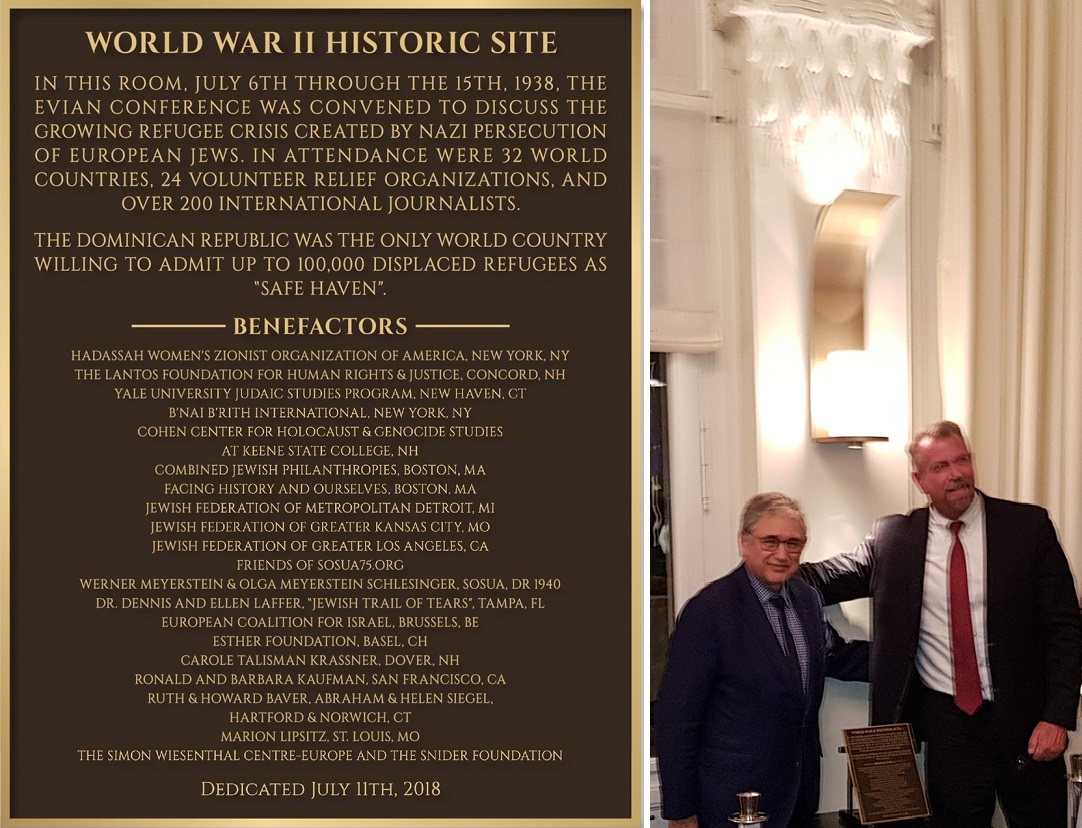 Together with Hugh Elihu Baver, father of the Sosúa/Evian Campaign, and the manager of the Hotel Royal, Marc Figueiredo, which hosted the 1938 conference in Evian, Samuels had called a press conference at the United Nations press centre in Geneva, to mark the 80th anniversaries of the Evian Conference and today’s commemoration of “Kristallnacht” (the Night of Broken Glass), when 1,500 synagogues were torched, thousands of Jewish stores were looted as their windows were smashed, and 30,000 Jews were rounded up and sent to concentration camps across Germany and Austria. 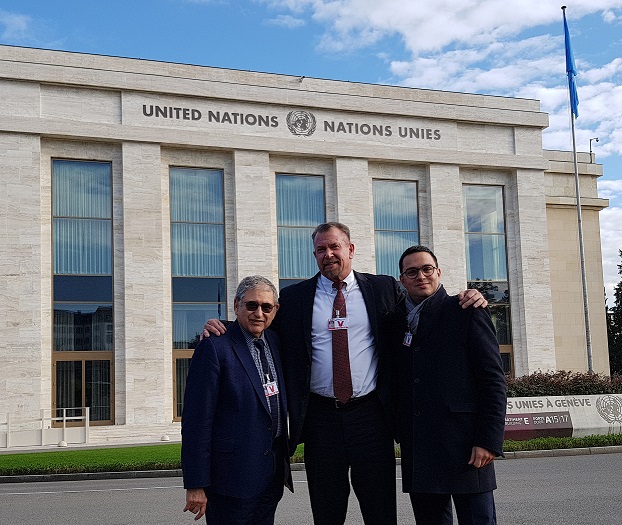 (left to right) Shimon Samuels, Hugh Baver and Marc Figueiredo at the United Nations in Geneva

The plaque was placed in the hotel’s ballroom, the same hall where 31 delegations explained why they could not take Jews.

As the only voice that offered asylum in 1938 - at the afternoon event denoted by Samuels as “Evian II” -  the Dominican Republic Embassy representative, Gabriela Santoni, today presented her President’s commitment to seek UNESCO World Heritage status for Sosúa, as had been proposed by Samuels, who first visited and reported on the Jewish village in 1971.

“Sosúa was one of the few lights in the darkness of the oncoming Holocaust. It offsets the shameful behaviour of nearby Cuba, which refused to honour its own entry visas for over 700 Jewish sea passengers who arrived to Havana on the SS St. Louis. The boat was forced to return to Germany. Passing Caribbean islands, Central America, Canada and the United States, all refused them salvation. The captain arranged that Britain, France, the Netherlands and Belgium take under 200 each. Only those who reached Britain survived the war,” recounted Samuels.

“While Geneva and Evian were direct precursors to the Holocaust, the Dominican Republic and the Jewish role in developing industries in Sosúa as a proud contribution to its host country, provide lessons for immigration policies of refugees today,” he concluded.