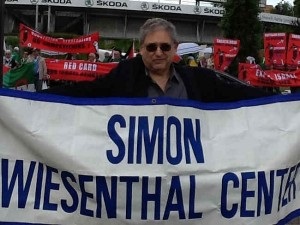 Wiesenthal Centre to FIFA: “Suspension of Israel would go down in Jewish sports history as a direct time-line from the 1936 Berlin Olympics to 1972 Munich to 2015 Zurich.”

“Palestinian Football Association President, Jibril Rajoub, on the other hand, has no concern for racism or discrimination nor the values of football. He has recruited one more arm against Israel, abusing FIFA as collateral damage and vilifying the beautiful game.”'

In a letter to FIFA President, Joseph Sepp Blatter, the Simon Wiesenthal Centre Director for International Relations, Dr. Shimon Samuels, stated, “We are appalled at the temerity of the Palestinian Football Association (PFA) demand that FIFA suspend Israel at your forthcoming Congress in Zurich.”

The letter viewed this as “one more front waged in the context of the Palestinian BDS (Boycott, Divestment, Sanctions) campaign, so redolent of the ‘Kaufen nicht bei Juden’ boycott of Jewish stores across Nazi Germany in the 1930's,” adding, “As political football, BDS is the direct antithesis of sport being the arena of fair play.”

"These are an offence to all Allied veterans and victims of World War II and encourage today's neo-Nazi activists and Skinhead youth."

Samuels observed that "born in London, I have always acknowledged the role of the Red Army on the Eastern Front in preventing a Nazi invasion of Great Britain. Thereby, your people's sacrifice contributed to the survival of British Jews from destruction in the Holocaust – only 50 kilometers away on the European continent", adding, "I am presently in Moscow for an international conference on 'The Lessons of Victory in the Second World War/The Great Patriotic War -  Seventy Years Later'.”

“Keep politics and religion out of the beautiful game.”

In a letter to the UEFA (Union of European Football Association) President, Michel Platini, the Simon Wiesenthal Centre Director for International Relations, Dr. Shimon Samuels, drew attention to “the constant incitement  and offence against the State of Israel on the Arabic site of Goal.com, a web site that prides itself in having a global constituency of over 64 million fans.”