The Centre urged Le Monde “to reconsider its relationship with Plantu. [...] Failing this, Le Monde may be viewed as co-responsible for incidents fomented by his provocations.”

The Simon Wiesenthal Centre Paris-based Director for International Relations, Dr. Shimon Samuels, joined his French associate, Sammy Ghozlan, Director of the BNVCA (National Bureau for Vigilance Against Antisemitism) in protesting the continual provocations of Plantu, whose notorious attacks on Orthodox Jews and Israelis have crossed a new threshold.

Plantu, a regular political cartoonist for Le Monde, placed his latest outrage, not in France's premier daily, but on his Facebook page. It depicts an Israeli soldier firing at Palestinian civilians, with a bearded stereotypical religious Jew telling him: “Look! Shoot faster! I am in a rush to move in.”

The Jew carries a suitcase tagged “New Colonies.” In view of the high number of French Jews fearing antisemitism in France and moving to Israel, some complainants see Plantu as attacking them directly.

The BNVCA has stated that Plantu “abuses the French constitutional right to freedom of expression,” but adds that “what he calls anti-Zionism has an inevitable stimulus on French antisemitic Jihadists to renew violent attacks on French Jews.”

The Wiesenthal Centre added its astonishment that Plantu was invited last February to Israel, as a speaker at the Holon International Caricaturist Exhibition. In view of his ideological hostility to Israel, the Centre is calling on the Exhibition organizers to blacklist him from future such events.

The Centre likewise urged Le Monde's Director – its Chief Editor recently resigned – Jérôme Fenoglio, to reconsider its relationship with Plantu, and insist he make a public apology for his offence to the Jewish People. Failing this, Le Monde may be viewed as co-responsible for incidents fomented by his provocations.

After the Charlie Hebdo massacre of last January, Plantu was given a three-man security detail. “In light of his constant support of Palestinian delegitimization of Israel, he has bought himself a lifetime insurance against any Jihadist attack. Thus the French government should save itself tax payers' money and, at least, remove the bodyguards,” concluded Samuels. 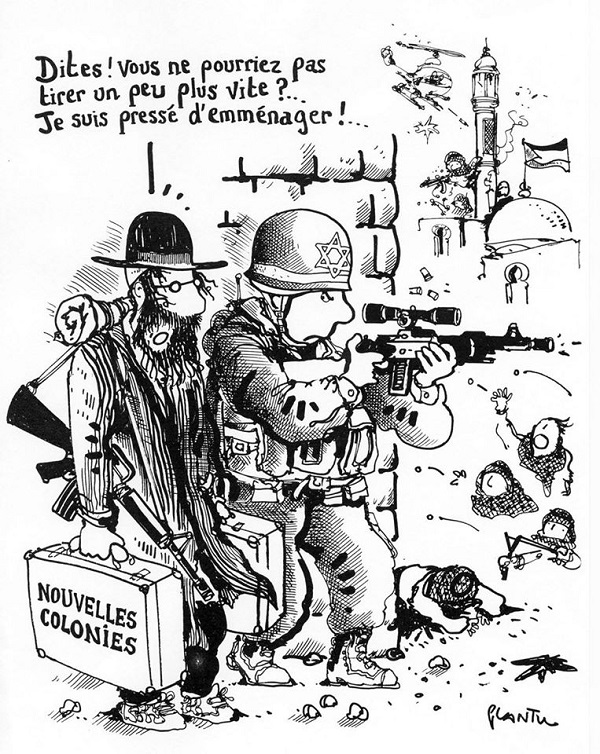