“While Shoah was a media blindspot, contemporary atrocity remains in the shadows. Where are the flotillas of indignation?”

The Russian University Holocaust Essay Competition was, for the seventh year, feted at UNESCO Paris Headquarters. Over 1,600 submissions from all over the former Soviet Union were judged by its competition coordinator, the Russian Holocaust Centre.

The five winners are invited in Paris by the French association Verbe et Lumière - Vigilance (founded by the Simon Wiesenthal Centre - Europe), where they are received at UNESCO.

Director-General, Irina Bokova, called this essay contest “an integral part of UNESCO’s efforts for young people in creating new educational material.” She particularly mentioned the importance of Israel in its commitment to Holocaust memory.

Russian Ambassador and Chair of the UNESCO Executive Board, Eleanora Mitrofanova, stressed “the Nazi state murder of 2 out of every 3 Jews in Europe and 3 million Soviet POWs... What was unique was the focus on killing Jewish children.”

Moscow Parliamentarian and Chair of the Russian Holocaust Centre, Alla Gerber, responded on the challenge of Holocaust memory in the former Soviet Union.

Keynote speaker, French Ambassador for Human Rights, François Zimeray, noted the misuse of language at Holocaust commemorations “when the Shoah in not present”: - “When we read of the ghetto of St. Denis and the Auschwitz of Gaza, then the ghetto was not a ghetto and Auschwitz was not Auschwitz...”

He called this “a semantic lie, a form of denial. Humanity has never had such means for knowledge, but, while Shoah was a media blindspot, contemporary atrocity is often left unseen in the shadows. There is no world mobilization. Where is the indignation? Where are the flotillas?”

Valeurs Actuelles Chief Editor, Michel Gurfinkiel, applied Emil Fackenheim’s imperiture to remember, in an age of disappearing witnesses. He summarized the dilemma as: “How to transmit the untransmittable, while preventing its distortion and misappropriation?”

- Anna Vitkina, of the Moscow Maimonides State Classical Academy, reported on her sociological polls of Russian opinion on Holocaust memory, highlighting figures on ignorance and denial.

- Ekatarina Zlochevskaya, of Moscow State University’s Institute for African and Asian Studies, wrote on Jewish Resistance in Lithuanian Ghettos through Diaries and Memoirs.

- Nikita Dunets, of the Belarus State University of Minks, Department of International Relations, analysed Jewish partisan resistance in Belarus through documents on the Bielski brothers.

Mark Richmond, of UNESCO Education Department, commented that “education on the Holocaust was not enough, but it is a point of departure,” emphasizing UNESCO’s commitment to these projects.

UNESCO Holocaust pedagogy expert noted that “Holocaust denial is part of normal language, often implicit by insinuation… in the case of school textbooks, denial can also be in saying nothing.”

Delegates of Germany, Israel, Russian and the United States participated in the meeting, which was chaired by Simon Wiesenthal Centre Director, Dr. Shimon Samuels, who summarized the proceedings ironically as: “When memory becomes History.” He thanked UNESCO Diplomatic Advisor, Dr. Graciela Samuels, for her coordination of this challenging session and Protocol Officer, Kendal Segre for her guidance. A vote of thanks was given by a Verbe et Lumière - Vigilance trustee, Alexandre Kaplan. 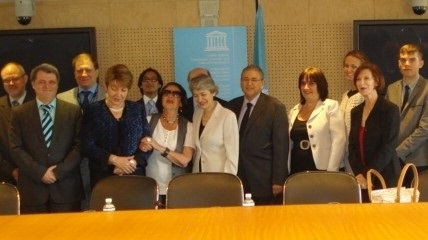 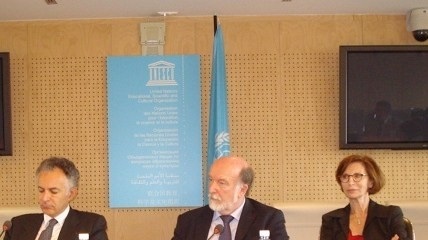 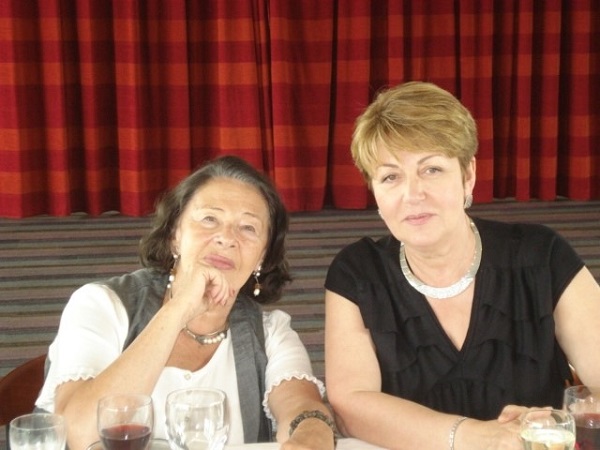 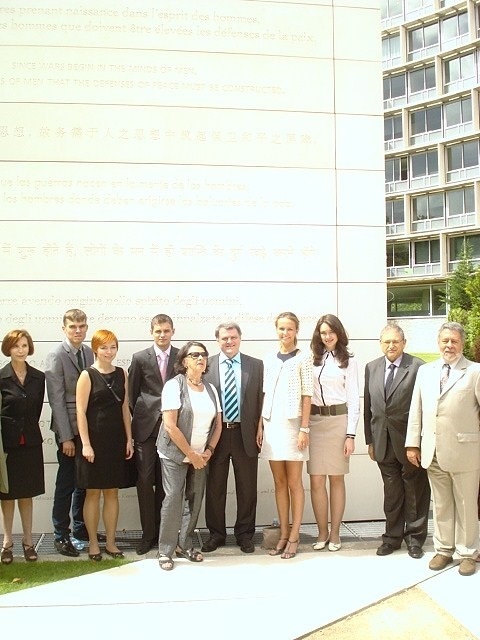 The group at the UNESCO Rabin Tolerance Memorial.