The Simon Wiesenthal Centre - Europe has the immense sadness to announce the passing, this Sunday, November 20th, of Dr Graciela Vaserman Samuels, spouse of Dr Shimon Samuels, Director for International Relations of the Centre.

Born in Argentina to a prominent family in the Jewish community, Graciela moved to Israel and studied Political Science at the Hebrew University of Jerusalem. Holding a Ph.D. in Literature from Temple University in Philadelphia, she founded the Hadassah Medical Relief Association, travelling worldwide to establish partnerships with other university hospitals.

Subsequently, as a UNESCO official in Paris – and as an Israeli citizen – she succeeded in promoting constructive dialogue even with the most difficult interlocutors, using her diplomatic skills and charming frankness, thus becoming Special Adviser to the last four Directors General of the Organization. 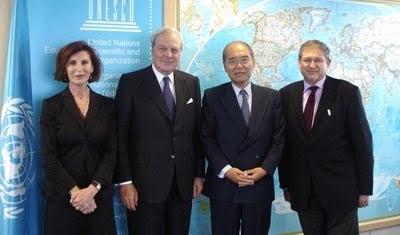 She divided her time between Paris and Tel Aviv with her husband, Shimon, along with their three daughters, Yardena, Michal and Davina, and four grandsons. As a novelist, Graciela authored Decoding Colours and Facing Off. She also inspired several cultural and educational projects.

Graciela worked relentlessly all her life to tear down or bypass barriers to human development – such as mental or physical disability, or racial, religious and gender prejudice... Thus she established channels of dialogue in the Gulf countries to facilitate the schooling and empowerment of young women in the cultural and professional life of traditional societies. Graciela had also actively supported the creation and development of institutions specializing in the training, socialization and promotion of people with disabilities.

She was always welcoming and attentive, providing sound advice with humour, empathy and pragmatism.

Although her passing leaves a painful void in the hearts of her family, friends and colleagues, Graciela also left us with a treasure of memories and encouragement. We stand with her husband and daughters and their respective families at this difficult time.

Heartfelt condolences from the Members of the Simon Wiesenthal Centre - Europe.