Attack on Judaism Claims that “Circumcision of Male Minors is a Violation of Children’s Rights!”

Raising the stakes are those child rights groups who switch their focus on Judaism, claiming “Medically Unnecessary Genital Cutting.” The campaign is led by a group of scholars and NGOs pooled into the “Brussels Collaboration on Bodily Integrity.”

See the link to “National Secular Society” referring to the Belgian Federal Government Committee for Bio-Ethics that, in September 2017, ruled against “Ritual Circumcision”:
https://www.secularism.org.uk/news/2017/09/belgian-federal-committee-rules-against-ritual-circumcision 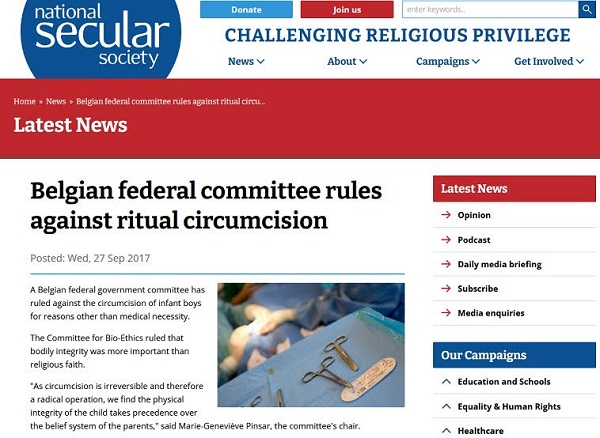 Once again, in a monthly avalanche of studies wrapped around Female Genital Mutilation (FGM) and Islamic circumcision, comes also the charge against Jewish Brith Mila.

The Wiesenthal Centre has monitored the political facets of the campaign:

- In 2010, the Royal Dutch Medical Society called on doctors to “discourage parents from having their sons circumcised”;

- in 2014, the Belgian Federal Government Committee decided that “the physical integrity of the child takes precedence over the belief system of its parents”;

- In 2016, the presentation, in similar language, was brought to the 47 member-states of the Council of Europe (meanwhile Russia has been expelled in March 2022); accepted in the Committee of Ministers, it was rejected by the Parliamentary Assembly;

- In 2019, the Brussels Collaboration on Bodily Integrity asked the UK Charity Commission to remove the (Jewish) Initiation Society from its list. Registered as a Charity, the Initiation Society’s mandate is “to ensure the highest medical and religious standards, while initiating a Jewish child into the Covenant of Abraham” and “to train the Mohelim” (the practitioners trained to circumcise baby boys as part of the “Brith Mila ceremony”);

- In 2020, a BBC documentary “A Cut too Far? Male Circumcision” presented Jewish and Muslim communities, questioning the acceptance of non-therapeutic infant circumcision.

The next step, according to the monthly papers received, emanating from the US-based NGO Attorneys for the Rights of the Child (ARC), will be another convention of the “Brussels Collaboration on Bodily Integrity.” In one paper is a weird statement: “In Judaism, only the boys are allowed to see the divine covenant, so this is sexist on its face.” Among the papers, is also the claim that, “Male circumcision is never ‘just a snip’... it is a frequently traumatic intervention and usually extremely painful, even in hospital settings.”

“Attacks on this fundamental ethic of Judaism can be construed as an insult to the Jewish People,” concluded Samuels.