Wiesenthal Centre, Henry Jackson Society and House of Wannsee Memorial joint webinar: “80 Years Since Wannsee: An Alarm for Other Genocides?” 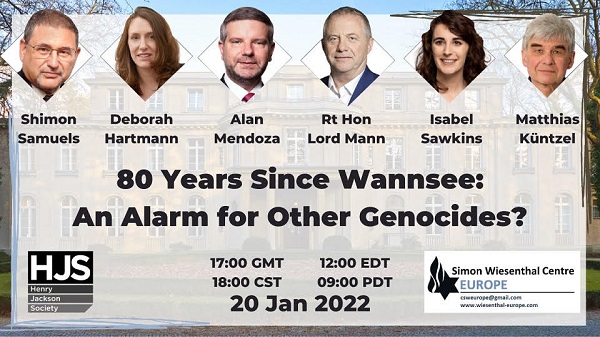 This 20 January, the Simon Wiesenthal Centre, the Henry Jackson Society and the House of the Wannsee Conference convened a Zoom webinar on the subject: “80 Years Since Wannsee: An Alarm for Other Genocides?”

A pivotal moment in the Nazi "final solution" of the “Jewish question,” the 1942 Wannsee conference’s intent was to fix a bureaucratic process and parameters – the ensuing Protocol – that detailed the systematic murder of the totality of the Jewish people. Based upon over 12 years digestion of Nazi hate, it was a banal exercise of absolute evil. Bureaucracy, as much as technology, was essential for its practical implementation.

The current global crisis is rife with conspiracy theories and the fomenting of hate in particular by far right extremists, inspired by the Wannsee protocol, processed through the multiplicator of social media.

Dr Alan Mendoza, Executive Director of The Henry Jackson Society, moderated the meeting, recalling the cooperation of his organization with the Wiesenthal Centre over the years and underlining the educational importance of this event: “It shines light on less known key historical facts, but also calls to act on the consequences.”

Dr Shimon Samuels, Director for International Relations of the Simon Wiesenthal Centre, focused on the “what if?” factor of history: “What if the Nazis had managed to invade Britain? What if Rommel had won at El Alamein and marched through Egypt to the Land of Israel and on to Syria and Persia? The fate of British Jewry as well as that of Middle Eastern and North African (MENA) communities would have been sealed.”

“The Wannsee Protocol, after 80 years, is a key to the uniqueness of the Final Solution, but also a paradigm for the memory of the respective victims of other genocides.”

Dr Deborah Hartmann, Director of the Memorial and Educational Site House of the Wannsee Conference, recalled that, “In the 1942 meeting of 15 Nazi bureaucrats, they did not negotiate the ‘if’, but the ‘how’ to implement the annihilation of 11 million Jews.”

“The Wannsee House has become a Memorial and an educational site, 50 years after that infamous conference, thanks to Jewish Holocaust survivors that have, for decades in post-War Germany, pushed back against denial in society and promoted the study and documentation of Nazi crimes and of the Shoah. Combating antisemitism – in its multiple forms of anti-Zionism, hate speech, banalization, stereotyping... – is still very relevant today.”

Dr Matthias Küntzel, Political Scientist and Historian, member of the German Council on Foreign Relations (DGAP), revealed that, “if the Wannsee Protocol listed the 11 million European Jews, less well known were the Nazi plans – as promised by Hitler to the Grand Mufti of Jerusalem, Haj Mohammed Amin al-Husseini, merely two weeks before Wannsee – to exterminate the Jews outside Europe, particularly in Palestine.”

“After 1945, the idea of thwarting a Jewish State at any cost lived on, with al-Husseini acting as a link to Hitler’s plan, inciting other Arab states to wage war against the new-born Israel, and with Egypt animated by the Muslim Brotherhood. After their defeat, the latter passed on the baton to an Iranian cleric, Ruhollah Musavi, who later became the Ayatollah Khomeini, who, with his successors, promised to ‘wipe Israel off the map by 2040!’ The international community does not take these threats seriously enough.”

Rt Hon Lord Mann, UK Government's Independent Adviser on Antisemitism, stressed “the role of the small aggressors, the ‘nobodies’ – bureaucrats, clerks, but also the indifferent bystanders – who played their parts in helping the implementation of their leaders’ plans. Today also many contribute to the perseverance of antisemitism by remaining silent at critical times.”

“Each and every one of us needs to learn the lessons of the Wannsee Protocol, to speak up against the antisemites, and to praise and replicate the good practices.”

“The purveyors of hate have unregulated access to social media. They manage to get together and coordinate, influencing youth in an unprecedented manner. As mentioned, the Wannsee Protocol must be a warning, not a precedent.”

The speeches were followed by a Q&A session.
The full proceedings of the Webinar can be viewed on YouTube at: https://www.youtube.com/watch?v=gjuNIUDxqgQ