“How Can Cities Respond to the Rise of Antisemitism?”: A Simon Wiesenthal Centre - ECCAR Zoom Meeting

The Simon Wiesenthal Centre-Europe, in partnership with ECCAR – the 158 municipality-member European Coalition of Cities Against Racism – held a zoom meeting entitled “How Can Cities Respond to the Rise of Antisemitism?”.

The Centre’s Director for International Relations, Dr. Shimon Samuels, thanked ECCAR President Benedetto Zacchiroli for bringing together Bologna, Brussels, Heidelberg and Wroclaw to discuss this subject, even more pernicious in the age of COVID-19. Samuels looked forward to continued projects with ECCAR.

As it annually monitors all forms of hatred at international book fairs, the Centre had received from its Nordic network the official website of the just opened Arab Book Fair in Malmö, Sweden. This offered a link to purchase from an online bookstore (Safahat Publishers), the following books:

“The Synagogue of Satan: The Secret History of Jewish World Domination” - published by Dar Tomoz, Syria

“May 15, The Nakba - Rape of Palestine and the creation of the Usurping Zionist Entity” - distributed by Safahat Publishers, Sweden 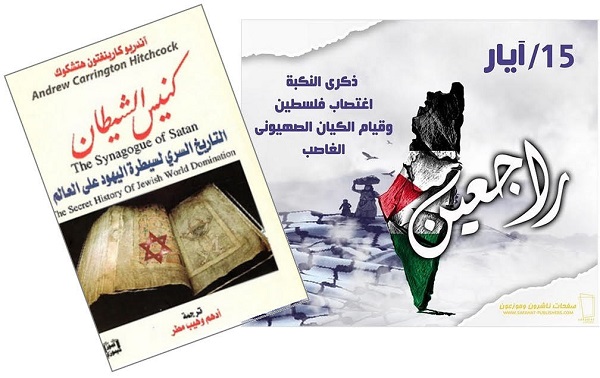 The Centre called upon its ECCAR partner to view this as a case study for its member cities.

- ECCAR President, Benedetto Zacchiroli, moderated the proceedings, greeting the speakers and participants in the name of the 158 member cities of the Coalition. He thanked the Simon Wiesenthal Centre as a partner and “lighthouse” against the dangers of antisemitism – in this time of great emergency – and considers ECCAR to be a vector for the Centre’s initiatives among the member-cities.

- Lord Mann, HM Government’s Independent Adviser on Antisemitism, announced a Parliament report on the multiple antisemitic conspiracies fed through the Anti-Vaxx campaign. He emphasized the importance for cities, universities and sport clubs to adopt the IHRA Definition – or better, Declaration – on antisemitism. He stressed that over 70% of UK cities, 15 major universities and British football clubs have already adopted the Declaration to educate against hate and bigotry.

- Uwe Becker, Mayor of Frankfurt and long-standing champion against antisemitism and other forms of discrimination, explained how Jewish tradition had modelled his city’s identity. He promotes the IHRA Definition – adopted by Germany in 2017 – in particular to fellow municipalities, as a response to the return of far-right antisemitic extremism, but also against the growing far-left BDS campaign (Boycott, Divestment and Sanctions against Israel) and Jihadi propaganda that threaten citizens on a daily basis.

- David Meghnagi, Professor of Psychology at Roma Tre University, has for decades fostered the development of interreligious dialogue and peace policies in the Near East and the Mediterranean. He highlighted the good practices of the academic network in Italy and in Europe that refuses antisemitic BDS campaigns, cooperates with Israeli campuses, has established specific Master courses on Holocaust studies, monitors school texts and forms teachers, all in the spirit of the IHRA Definition.

- Sylvain Maillard, Member of the French National Assembly and Chair of the Working Group on Combating Antisemitism, had promoted the December 2019 resolution for Parliament to adopt the IHRA Definition. He recalled that antisemitic and hate crimes have risen exponentially in the past decade, thus prompting the new legislative arsenal to combat all forms of discrimination. He stressed that the term “anti-Zionism” is no less than a synonym of “Jew-hatred.”

- The city of Wroclaw, Poland, represented by Mr. Jan Wais, its Deputy Director for Foreign Relations, expressed appreciation – as a new member of ECCAR and its first step in the Coalition – to participate in this meeting. He emphasized how Wroclaw, formerly known as Breslau, is a city with a unique memory of its Jewish heritage, represented by the White Stork Synagogue, a building that survived the Nazi Kristallnacht pogrom due to its vicinity to other buildings.

- The city of Heidelberg, Germany – the seat of ECCAR’s Secretariat – was represented by its Anti-discrimination Expert, Danijel Cubelic, and the Equal Opportunities Officer Evein Obulor. Cubelic stressed that, as Germany is a post-migrant society, the changing face of antisemitism needs to be addressed through bridging experiences and inter-community dialogue. Obulor briefly explained the dynamic and tools for cities’ accession to ECCAR.

- Pascale Falek, European Commission Policy Officer at DG Justice - Office of the Coordinator on Combating antisemitism, highlighted the importance of reporting antisemitic acts, as what is known today is but the tip of the iceberg. She suggested to widely implement the IHRA Definition of Antisemitism, as a training instrument for police, teachers, sport instructors, civil servants.

- Simon Wiesenthal Centre-France President, Richard Odier, concluded the meeting emphasizing the importance of culture, education, monitoring and data gathering to prevent further rise of antisemitic crimes. He described the Wiesenthal Centre’s work over the past decades, namely monitoring small radical NGOs... The recent hideous beheading of a schoolteacher by a Jihadi militant was fruit of incitement by antisemitic and extremist organizations, signalled to the authorities some twenty years ago by Shimon Samuels. 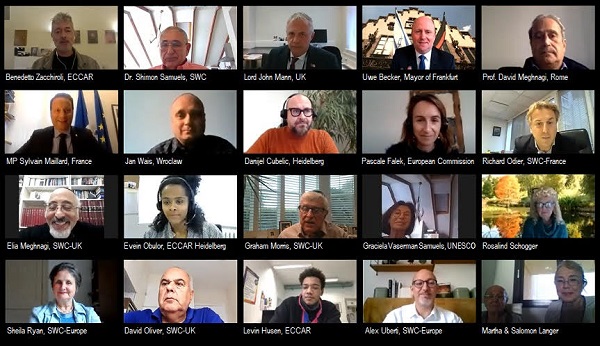 “Simon Wiesenthal’s dictum ‘What begins with the Jews ends with someone else’ is a lesson that applies to all victims of discrimination: Gypsies, LGBT, Rwanda and elsewhere. Though we may not always be able to understand and share the same values for the good, we can get along together speaking out on what is bad: censorship, torture, prejudice, hate... and thrive to peace – as in the recent normalization of relations between Israel and three Arab countries – hoping human rights will become a common universal value. The IHRA Definition is a useful tool to identify antisemitism – a paradigm for other forms of discrimination – and its implementation is essential!”