Wiesenthal Center Calls on Argentine Authorities to Act Forthwith on Murder Threats Against the Jews, the President and the Denigration of Measures to Control the Pandemic

“Argentines Awake to the World Jewish Dictatorship... The Jews are the virus... Put on the mask, don't think, don't complain!”

In the Argentine city of Neuquén, Patagonia, posters are appearing that call for the nation to arise against sanitary measures ordered by the federal authorities to control the pandemic.

The message is a conspiracy theory claiming that COVID-19 does not exist, and that all precautions are generated by the Jews, to install a world Jewish dictatorship, freedom of expression and to sell a vaccine against a non-existent disease.

Above all the posters call for the murder of the President of the Republic to “normalize tyrannicide.” 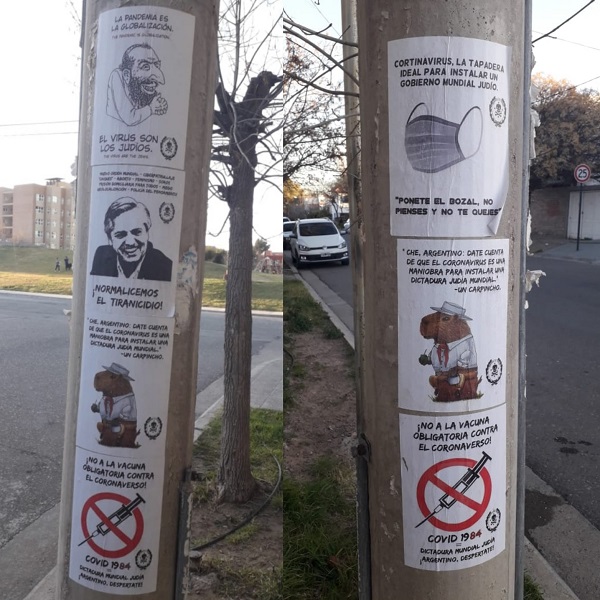 “Blaming the Jews for epidemics from which they are accused to profit is known throughout history as ‘blood libel’... Since the outset of the virus, it flourishes on social media… However, to claim that the pandemic does not exist and the call to end precautions is an act of ‘terrorism’ against Argentina, compounded by the murder threat against the President... Patagonia recalls the Nazi haven of Bariloche and the 1970’s leaflet, The ‘Andian Plan,’ a forgery presented as an Israeli/Jewish takeover of Patagonia as a second Zionist State,” noted the Director for International Relations of the Simon Wiesenthal Center, Dr. Shimon Samuels.

Dr. Ariel Gelblung, the Center’s Latin American Director, concluded: “Whoever made, distributed and published these posters violated the law. It is not about freedom of expression but criminals who are proposing ‘tyrannicide’ – a euphemism for the execution of the President... They are spreading a message of hate clearly punishable by law. It is not surprising that it happens in the same location where the extreme right obtained 30,000 votes in the preliminary elections of 2019. We urge both provincial and federal authorities not to minimize this action, investigate and act with the full force of the law.”