Turkish Anti-Jewish/Anti-Christian Magazine Calls for Islamic Republic Based on “If Not Now, When? If Not You, Who?”

Gercek Khayat (True Life magazine) celebrates the ‘conversion’ of Hagia Sophia Cathedral Museum into a Mosque – calls on Erdogan as ‘Caliph’ to establish Islamic rule beyond Turkish borders.” ... “A case of i.d. theft? First of a Christian Cathedral and, now, the Talmud!”

“After Hagia Sophia Church opened to worship as a mosque, discussion returned to the Caliphate, along a route from Mecca to Al-Quds (Jerusalem) and beyond. The shining landmark along the way is Istanbul, through the shrine of Hagia Sophia... The Philippines, Niger, Indonesia are the Land of the Caliphate, coordinating the world’s Muslims... Muslims are brothers!” claims Gercek Khayat, continuing: “They tried to make Fethullah Gulen the Caliph” [Gulen is Erdogan’s arch-enemy currently protected under asylum in the United States]. 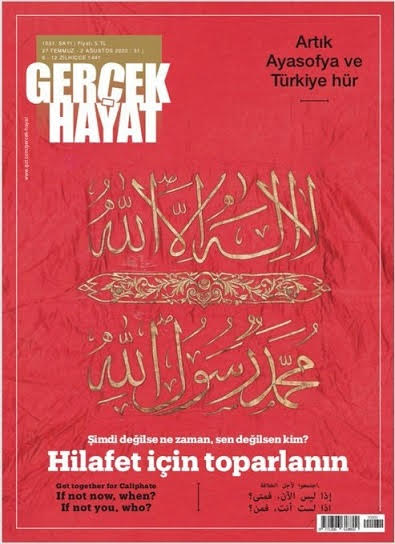 Gerçek Hayat magazine: “Now Hagia Sophia and Turkey are free
– If not now, when? If not you, who? Gather up for the Caliphate!”

“Gercek Khayat has a campaign to demand visas for all Israeli visitors to Turkey and make entry visa-free for Palestinians. This is rejected by the tourist industry, as in 2019 there were 63 000 Israeli tourists, opposed to about 2 000 Palestinians,” stated Wiesenthal Centre Director for International Relations, Dr. Shimon Samuels. 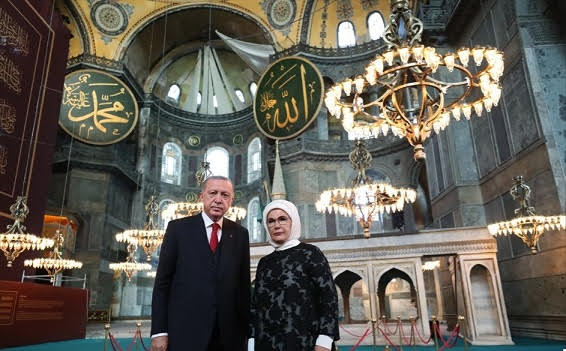 IHH spent more than two million dollars to support the Free Gaza Movement – allegedly tied to Hamas – in May 2010, sending a flotilla of ten ships “to break through Israel’s blockade of the Gaza Strip.”

Turkish policy across the Middle East and North Africa has the flavour of Caliphate building... It is, however, weird that it publicly appears under the Jewish banner of Rabbi Hillel’s “Ethics of the Fathers!, 14”:

“A case of i.d. theft? First of a Christian Cathedral and, now, the Talmud,” concluded Samuels.