“We hope UNESCO will take the necessary measures for Israel to return.”

Due, however, to the pandemic, this 16th year meeting took place through Zoom. 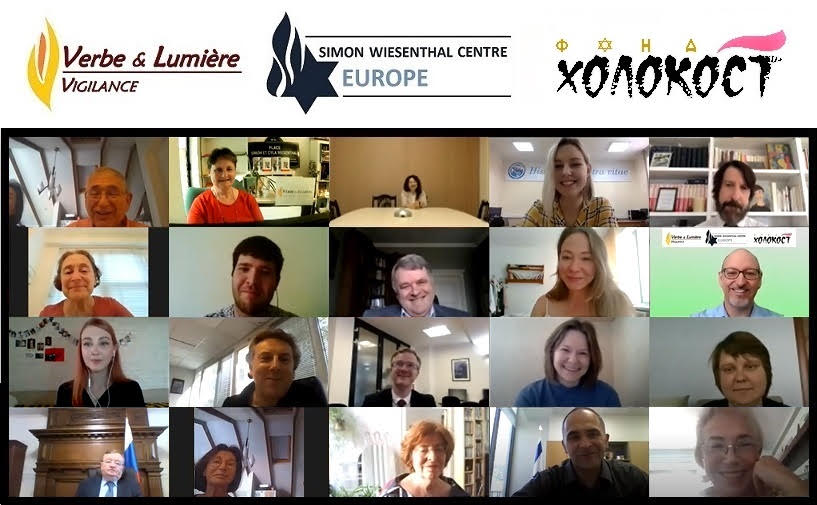 The meeting was attended by the Permanent Delegations to UNESCO of the Russian Federation and of Germany, as well as the DCM of the Israeli Embassy to International Organizations based in France.

The proceedings were opened by Shimon Samuels, Director for International Relations of the Simon Wiesenthal Centre, who presented the 16-year background of this project... Followed by Dr. Graciela Vaserman Samuels, who welcomed the laureates on behalf of UNESCO, with the hope that next year the situation will permit a return to Paris.

Russian Ambassador, Alexander Kuznetsov, recalled that, “this year marks the 75th anniversary of victory over Nazi Germany, that 40% of the six million murdered Jews were Soviet citizens and next in line for extermination were the Slavs. Today, antisemitism, racism and hatred continue to spread. We must promote education on the Holocaust and preserve the memory of the heroes and of the victims.”

Israeli DCM Yaron Gamburg stated that, “as a grandson of survivors and of those who did not survive, I view the Holocaust as not just about history, but a heritage for today and tomorrow... Israel is no longer a member of UNESCO as it was singled out there, just as the Jews have been through history.”

Richard Odier, President of Verbe et Lumière-Vigilance and of the Centre Simon Wiesenthal-France, quoted Franz Kafka: “In the struggle between me and the world, we should side with the world,” and stated that “now thousands of students are doing just that. The universal lesson of the Shoah is for the future. As Elie Wiesel and Simon Wiesenthal stressed 'indifference is the worst thing on earth', we must interfere when human lives are at risk. May this be a decade of peace, health and understanding.”

Rabbi Stephen Berkowitz, serving the communities of Barcelona, Montpellier and Toulouse, reminded the Zoom participants that “today is the Tammuz 17 in the Hebrew calendar, a day of fasting, to commemorate tragedies in Jewish history, such as the destruction of the Temple in Jerusalem.” He listed how Holocaust commemoration initiatives “have evolved from particularistic to more universal and inclusive. The cross-section of victims of Nazism strengthens solidarity and brings more people together to identify and share in the Shoah, thus creating an incentive of support to Holocaust commemoration and education – a moral obligation towards future generations.” The Rabbi highlighted significant events in Spain and Catalunya, such as the Pyrenees Memory Routes, through which European fugitives from Nazism managed to evade the Holocaust, and the value of publications, testimonies and cultural programmes in enhancing consciousness and education.

Vadim Kantorov, an engineer from Yekaterinburg who now lives in Paris, explained his search for roots and his campaign against antisemitic stickers across Paris, in cooperation with the Wiesenthal Centre. “While banks immediately remove anti-capitalist stickers and graffiti, they don’t react fast enough to remove the antisemitic/anti-Zionist ones... Only the Centre Simon Wiesenthal responded to this challenge...”

Ilya Altman, Co-Chairman of the Russian Holocaust Centre and Professor of the Russian State University for Humanities, recalled “the genesis of this essay competition, its growing international and academic success – in cooperation with CSW-Europe and V&L-V – and the project to publish a book of the essays, showing the evolution, development and focus points throughout the years.” He announced “a new and unique master course on Policy of Memory, History of the Holocaust and Genocides, that will be established in Moscow University, to form future diplomats and teachers.” He concluded: “The choice of this year’s laureates reflects the international relevance of the lessons of the Holocaust.”

He then presented the five laureates (see abstracts of their papers in links below):

Galina Lochekhina, M.A. student of the Jagiellonian University (Krakow, Poland): “A gift for Anita: the story of one immigration to Brazil”

Sophia Klenova, student of the Altai State University (Barnaul, Russia): “The Holocaust and its Perception in the international community, 1961–2018”

Maria Frolova, M.A. student of the Higher School of Economics – National Research University (St. Petersburg, Russia): “The image of the Holocaust in films of the German Democratic Republic and the Federal Republic of Germany (1950–1990) as an instrument of politics of memory”

Sofya Shestakova, student of the Kemerovo State University (Russia): “Holocaust Denial as a soft power instrument of the Islamic Republic of Iran”

Adv. Harriet Tamen, a founder of Verbe et Lumière-Vigilance, lamented “the lack of knowledge concerning the Holocaust among young people and the growing perception of the Shoah as ancient history.” She acknowledged this initiative “as a rare and vital instrument, to build awareness, responsibility for history and for future generations.”

Mr. Jens Streckert, representing the German Delegation to UNESCO, stressed how “this contest is more relevant than ever, as we are facing a new rise in antisemitism, racism and xenophobia. While survivors and witnesses are disappearing, such dedication to keep Memory alive is encouraging.” He expressed “full support to this type of initiative, congratulating the international scope and variety of topics covered by the laureates.”

Richard Odier thanked all participants and repeated his hope that “UNESCO will take the necessary measures for Israel to return.”

Shimon Samuels closed the meeting with the hope that the laureates will celebrate “next year in Paris!”