This was based on the original English version from “Success Archive” (broadcast on 25 March), based in Romania, again through Youtube
(see link:https://www.youtube.com/watch?v=GPAG9oT34Wo).

The letter drew attention to “the well-respected Tablet Magazine's description of Icke as 'unhinged and antisemitic,' in referring to his book, And the Truth Shall Set You Free, wherein he claims that a secret Jewish conspiracy controls the world. Based on the infamous Protocols of the Elders of Zion, a Russian Tsarist forgery, Icke’s publisher reportedly cancelled their contract and the book apparently ended up being self-printed.”

“The book also tells how, in 1995, the Japanese magazine Marco Polo was closed down by its parent company, because of a campaign by 'the global Jewish hierarchy' to stop its advertising revenue after it published an article 'questioning some of the official stories regarding the Nazi concentration camps',” noted Samuels, adding, “Icke had it wrong. My colleague, Rabbi Abraham Cooper, Associate Dean of our Centre, was invited by the company to Tokyo to resolve the matter.”

Another Holocaust-related comment in the book claimed that “... free copies of the Spielberg film Schindler’s List are given to schools to indoctrinate children with the unchallenged version of events.”

Samuels recalled how, “in 2016, following our protest, the 57 member-state Organisation for Cooperation and Security in Europe (OSCE) closed down a bookstore at its meeting in Pristina, Kosovo, which displayed several versions – in Albanian – of Hitler’s Mein Kampf, together with Icke’s Human Race Get Off Your Knees: The Lion Sleeps No More, wherein the 'Universal Controllers' are portrayed as a reptilian race from outer space.” 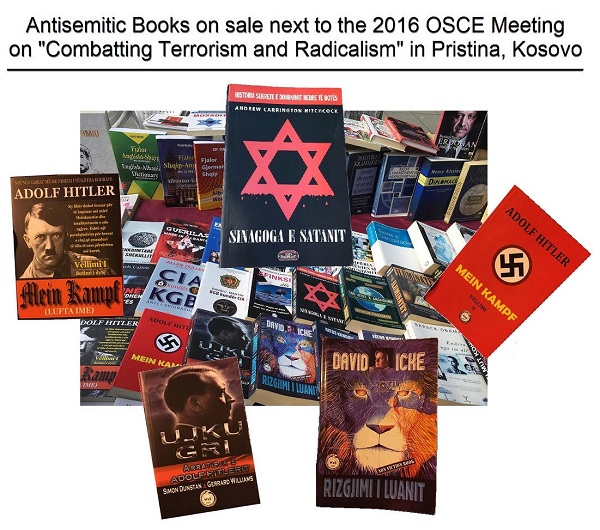 The Centre reported that, “the United Kingdom media regulator, OFCOM, is apparently investigating Icke for his interviews this week on London Real and on London Live radio stations. Icke had apparently spoken of 'Rothschild Zionists,' seeming to imply that the pandemic was used by Israel to test its technology. He also reportedly attacked the new 5G technology as part of 'the conspiracy'.”

The letter stressed that “ECTV’s presentation has granted Icke a platform in Spanish for insinuation and visual inference, for example, the pyramid of power shown in the clip, included his obsession, Lord Rothschild.”

Samuels emphasized how, “more worrying were comments of those who relished his message.

- 'We all know who is this cult that controls all' (Todos sabemos quiénes son ese culto que controla todo..) – a comment by 'Adolfo nacionalista', decorated with a swastika;

“ECTV has therefore been used and abused to endorse bigotry” ... “We urge you to remove the interview and ensure that this outrage is not repeated,” concluded Samuels.