“Murder of Jews carries no judicial penalty when the perpetrator is high on narcotics.”

On 4 April 2017, Sarah Halimi, a 65 year old retired medical doctor and former Director of a nursery, was brutally stabbed and thrown to her death from her third floor balcony, by a neighbour screaming “Allahu Akbar.”

The Court, on appeal, dismissed all charges on grounds that her murderer was “not responsible while under the influence of cannabis.”

The Simon Wiesenthal Centre, from the beginning of the legal process, turned to the Justice Minister, to consider the ramifications of a case of blatant and brutal antisemitism.

Despite the ongoing transport strike and the many still away on New Year holiday, thousands responded to Sunday's call for, what became, solidarity against antisemitism. Coincidentally, the rally on Place de la République and march from there to the victim’s apartment building took place just as Jews and their friends were similarly demonstrating in New York - among them the Simon Wiesenthal Centre - against the growing Jew-hatred.

“Since the Holocaust, the Atlantic was a buffer as anti-Jewish violence returned to Europe. The old continent is now a trip-wire for incitement in the United States, as copy-cat violence burgeons through social media,” argued the Centre’s Director for International Relations, Dr. Shimon Samuels.

“From the 1980 Rue Copernic Synagogue bombing, through the 1982 Goldenberg Restaurant massacre, to the vicious kidnapping, torture and murder of Ilan Halimi in 2006, the Toulouse attack on a Jewish school in 2012, the Hypercacher supermarket hold-up and murders in 2015, to Sarah Halimi in 2017, followed by 85 year old Holocaust survivor Mireille Knoll, stabbed and set on fire in 2018... the list does not include the beatings, stabbings, cemetery desecrations and a litany of other assaults across France,” cited the Centre.

At this gathering, the Police was out in full force to protect the rally and the march.

However, the nightmare is far from over.

"Sarah Halimi is a test case. Intellectuals, celebrities and journalists, Jews and Gentiles, are speaking out. Now, the people in the rally and the march demand Justice... Will the tribunal reconsider its unjust ruling? If not, a poster at the gathering, with the silhouette of Hitler, carries an ironic message, accentuating an unacceptable reality - 'Murder of Jews carries no judicial penalty when the perpetrator is high on narcotics',” concluded Samuels. 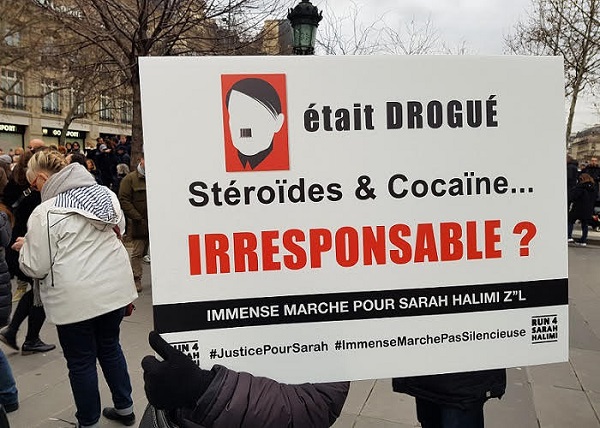 "[Hitler] was high on steroids and cocaine... Not Responsible?"