"As your official partner, we propose that the European Coalition of Cities Against Racism (ECCAR) compile and maintain a watch list of notorious racist bigots who hold municipal standing or platforms."

Paris, 25 July 2019In a letter to Benedetto Zacchiroli, President of the 158-member municipalities of the European Coalition of Cities Against Racism (ECCAR) the Simon Wiesenthal Centre Director for International Relations,Dr. Shimon Samuels, drew attention to the behaviour of Djamel Boumaaz, elected to the town council of Montpellier (Herault), reportedly on the National Rally (formerly far right National Front) ticket.

According to the French National Bureau for Vigilance Against Antisemitism, Boumaaz has been fined in the past for his numerous “quenelles” - inverted Hitler salutes - an action banned by law in France. Furthermore, he had also been sanctioned for having torn down a “rainbow pride flag” hoisted by the Montpellier Municipality on the International Day Against Homophobia. 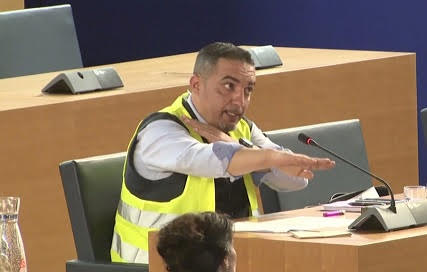 Boumaaz performing a “quenelle” - inverted Hitler salute - in a session
of the Montpellier Municipality Council.

Samuels noted "his latest display of hate and antisemitism, published in the Herault Tribune - see tweet below -  “I spent a beautiful day with my family, music, food in the home of my SS friend, then my birthday cake arrived, a gift from my SS friend...”

The cake is decorated with a swastika. 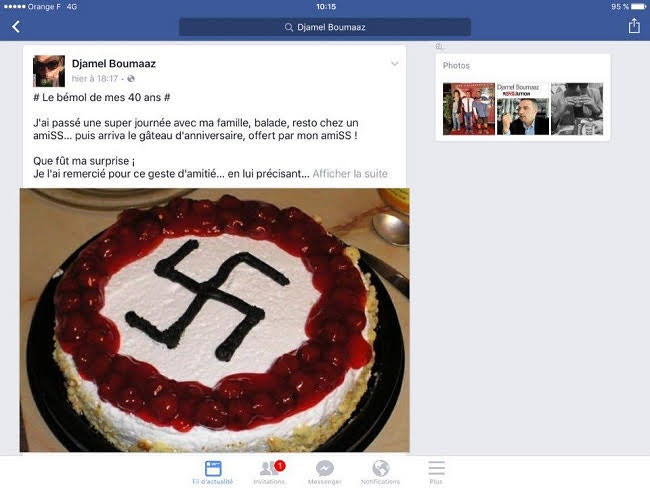 The Centre appealed to ECCAR, "to condemn Boumaaz and to urge the Mayor of Montpellier to take measures to remove him from his municipal functions." adding "as your official partner, we propose that ECCAR compile and maintain a watch list of notorious racist bigots,who hold municipal standing and platforms."This letter was shared with Katharina Von Schnurbein, European Commission Coordinator on Combatting Antisemitism.