Over 100 school children recounted the true stories of child deportees to Auschwitz, on the stage of a packed auditorium of the MAXXI (the Italian 21st Century Art Museum).

The following day, the Wiesenthal Centre/UNESCO exhibition “People, Book, Land: the 3500 Year Relationship of the Jewish People with the Holy Land” was hosted at Palazzo Valentini, the Metropolitan City of Rome headquarters (MCRC), under the auspices of the MCRC, the Jewish Community of Rome and the Israeli Embassy to Italy.

Shimon Samuels pointed to the “thread throughout the 24 panels of the ethical code and values contributed by the Jewish people to humanity”... “from the freeing of slaves, to the 7th day of rest, to the role of the Biblical prophets to check and balance the monarch, as a precursor to the rule of law...”

Gemma Guerrini, President of the Metropolitan City of Rome, which includes also the 121 municipalities surrounding Rome, thanked the Wiesenthal Centre for bringing this exhibition to her city on the occasion of the national commemoration of the Shoah, stressing that it would prove essential to the planned high school students visits over its 2-week display, to provide an overview of Jewish history as a tool against resurgent antisemitism.

Ruth Dureghello, President of the Jewish Community of Rome - the oldest Jewish community in Europe - stressed the importance of asserting the Jewish narrative, now under constant attack. She added her committment to take the exhibition on a tour around Italy in cooperation with the Wiesenthal Centre, the European Coalition of Cities Against Racism and the Israeli Embassy.

Ofra Farhi, Deputy Chief of Mission of the Israeli Embassy to Italy, focussed on “People, Book, Land as the trinity of Judaism,” with emphasis on the Land of Israel as a place bestowed on the Jews.

Morgan Hall, Secretary for Political Affairs at the US Embassy to Italy, accentuated the constant need to focus on memory and education to combat contemporary denial.

Rabbi Abraham Cooper, Associate Dean and Director for Global Social Action of the Simon Wiesenthal Centre, recalled the fact that the exhibition’s author, the late Professor Robert Wistrich, passed away in Rome. He added the important message that Rome’s official buildings had set their flags at half-mast as a sign of respect on Holocaust Commemoration Day. He also stressed how such examples of solidarity must not be only for the Jewish victims but also for the living. He recalled that this exhibition is a tribute to the universality of common values introduced by Judaism to civilization, whether in Rome, Los Angeles or Jerusalem. 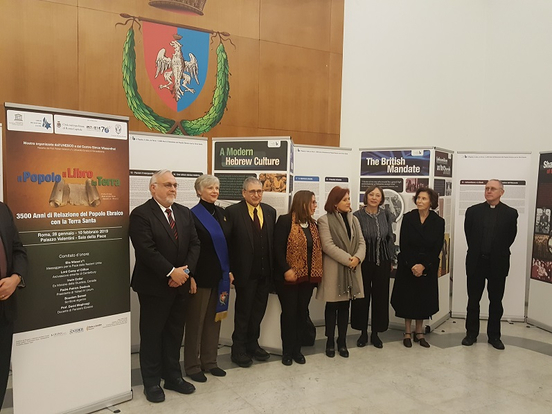 Other guests included Angelo Diario, President of the City of Rome’s Commission on Sport and Quality of Life, who - together with Gemma Guerrini - had invited the Wiesenthal Centre to present its exhibition and initiatives to the City of Rome; Czech Republic Ambassador Hana Hubackova; Father Norbert Hofmann, Secretary of the Vatican Commission for Relations with Judaism; Father Roberto Cherubini, Director for External Relations of the Pontifical Urbaniana University; Dr. Graciela Vaserman Samuels, Special Advisor to the Director General of UNESCO; international interns at the CMRC and representatives of NGOs sensitive to the agenda of the Wiesenthal Centre.

The event was moderated by Alex Uberti, Consultant to the European office of the Centre and liaison for the exhibition’s display in Europe. He also presented the Italian version of the Wiesenthal Centre’s 2019 Multifaith Calendar to the Roman municipal authorities, who had requested its translation for distribution throughout the Metropolitan area, as a tool for inter-religious understanding and tolerance. The Italian versions of the “People, Book, Land...” exhibition and of the “Multifaith Calendar 2019” were both produced with the support of the Snider Foundation.

The proceedings were recorded and are available at the following “Radio Radicale” link:
https://www.radioradicale.it/scheda/564111/inaugurazione-della-mostra-il-popolo-il-libro-la-terra-3500-anni-di-relazione-del