“Extremes of right and left have hijacked the ‘movement’, held together by conspiracy theories, antisemitism and other forms of hatred.”

“Next Saturday’s extreme right hatefest must be banned: lack of response will become a factor in candidates' campaign for the May 2019 European Parliamentary elections, as 'Yellow Fever' turns into a French 'Intifada'.”

“In the ninth week of Saturday demonstrations of the so-called ‘Gilets Jaunes’ (Yellow Jackets, YJ) protests in Paris and across France, there seems to be no end in sight,” claimed Wiesenthal Centre Director for International Relations, Dr. Shimon Samuels. 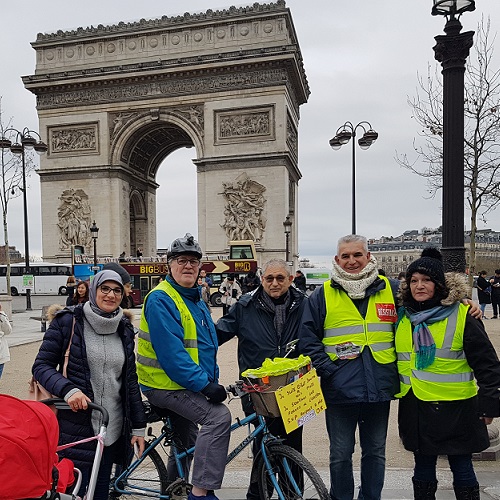 A pre-Sabbath presence of Yellow Jackets on the Champs Elysées.

In a letter to French Interior Minister, Christophe Castaner, Samuels had argued, “What began as marchers focussed against the tax rise on petrol - since resolved by the Macron administration - have now been infiltrated by extreme right and extreme left vandals, anarchists and agitators, bent on theft, violence and mayhem. Their unifying factor is conspiracy theories and Jew hatred.”

In a meeting last week, the Centre learned from French former National Police Commissioner, Frédéric Péchenard, that, “of each thousand demonstrators detained, only 11 are arraigned.”

Another source claimed that “42% of current YJs voted for extreme right Marine Le Pen and over 20% for extreme left Jean-Luc Mélenchon.”

No defined leadership has emerged from the YJs. Indeed, protests are organized on social media based upon “intersectionality,” a concept that draws all victims - of theft, poverty, violence - in joint solidarity. 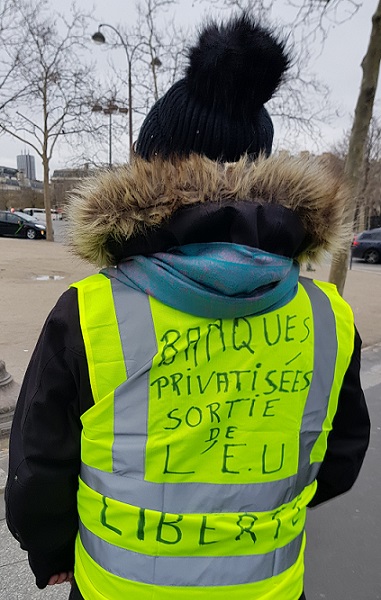 Yet, “yellow fever” has created a climate of fear and threats:

- One of several such threats against Macron’s party MPs was expressed as follows: “By what right does an African mix in the affairs of France... unfortunately escaping the machetes of Rwanda. The choice is the suitcase or the coffin... It is so easy to put a bullet in your head, in this climate, as a victim of a hunting accident.”

- A female Macron MP, following her television criticism of the YJs, was called “kike, dirty Jewess”;

- The “Quenelle” (inverted Hitler salute) was seen in Paris Montmartre area and in the Paris underground.

"One could sense a brewing atmosphere of violence as I myself saw pepper spray immobilizers held by protesters,” noted Samuels, adding, “next Saturday 19 January, neo-Nazis will join the rally under the banner of 'Yellow Jackets, a Time for Revolution!' The lead speaker will be Alain Soral, the ‘Anti-Zionist Party’ founder, linked to widely notorious antisemite Dieudonné, together with a retinue of neo-Nazi agitators... An extreme left/Islamist alliance are expected to confront the fascists, while hurling anti-Zionist slogans.” 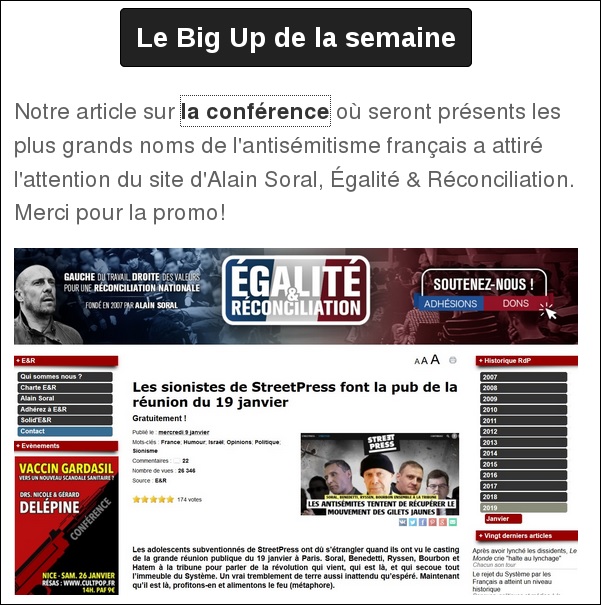 “What goes around comes around, as the extremes of Right and Left nourish each other, both stand to gain from the chaos,” continued Samuels.

The Wiesenthal Centre is demanding of all political party leaders from Mélenchon to Le Pen “to repudiate and publicly condemn YJ incitement to antisemitism and other targets of racism in France.”

The same is requested from the first apparent YJ leaders: Jacline Mouraud and Ghislain Coutard, “to preserve the genuine YJ original cause of fighting poverty and, consequently, to root out the hatemongers who attempt to hijack the movement by resorting to violence.”

Interior Minister, Christophe Castaner, together with the above politicians, is called upon to ban next Saturday’s extreme right hatefest.

“Those political leaders who choose not to respond, will be deemed insensitive to hate, which will be construed as a factor in their candidates’ campaign for the May 2019 European Parliamentary elections... and be viewed as complicit in the Yellow Fever turning into a French Intifada,” concluded Samuels.