For the 15th year, the Simon Wiesenthal Centre is the only non-governmental organisation to monitor hate and violence on the display stands of the Frankfurt Book Fair (FBF).

"With over 7,300 exhibitors from 150 countries and more than 300,000 visitors, this is the largest annual international gathering of the publishing industry", claimed Jurgen Boos, FBF Director. It is referred to as "The Olympics of Book Fairs".

"We monitor some 300 stands... This year was most encouraging in the diminution of hate material on display. This may be due to our prior monitoring and exposing the huge presence of antisemitic titles at Arab book fairs. We then denounce the delinquent publishers to the Frankfurt authorities as likely to violate their contractual obbligations to the Fair which prohibit incitement to hate and violence," explained Shimon Samuels, the Centre's Director for International Relations.

"Nevertheless the Fair is not hate-free... this is our report," he added. 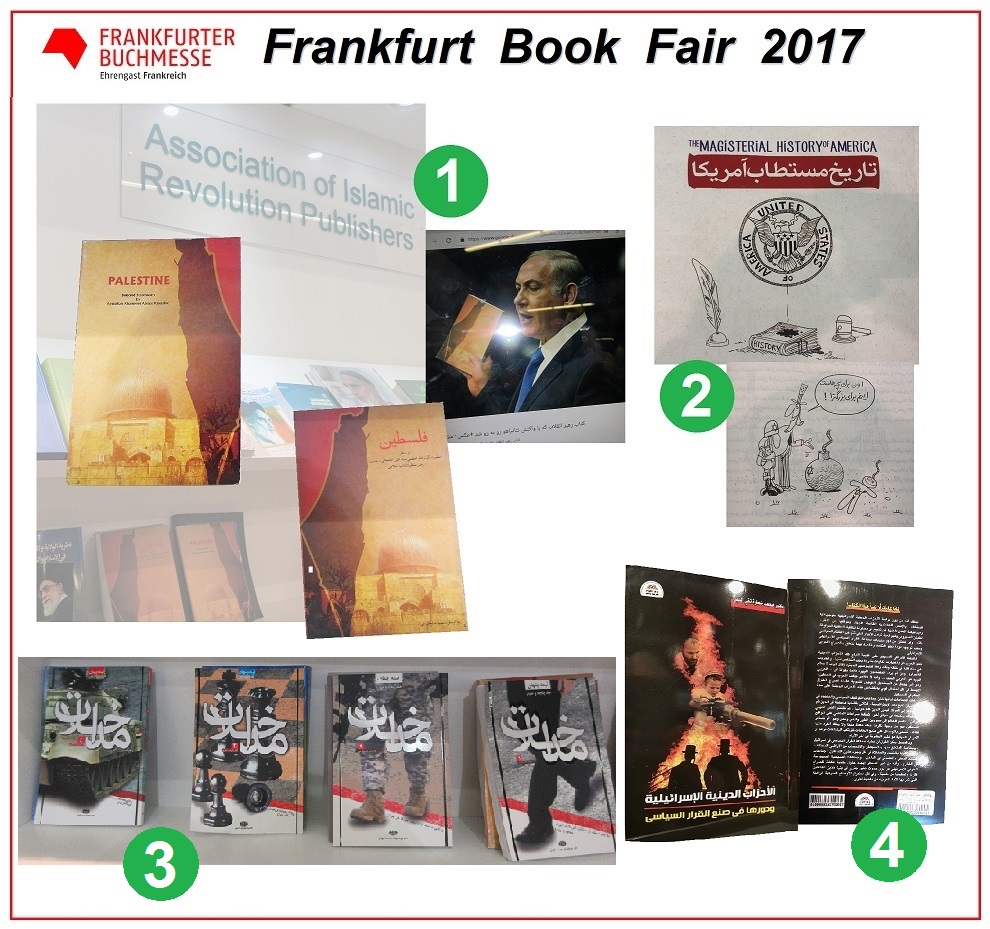 This is the book waved by Binyamin Netanyahu from the podium of the United Nations to illustrate Iranian genocidal intent.

Note: The Farsi version is double the size and reportedly much more hostile to Jews in the language of the Protocols of Zion.Farsi version:
http://book-khamenei.ir/index.aspx?&fkeyid=&siteid=1&pageid=208&description=16235

A selection of chapters in the English edition:
The Most Important Problem of the Islamic World - Selected statements by Ayatollah Khamenei About Palestine.

- Bait ul Moqaddas, The Main Pivot (The Temple Mount)
- Preparation of the Iranian Nation for Struggle: Palestine Non-negotiable
- The Hegemony of Zionism over the Majority of News Agencies
- The Hegemony of Zionism over the Majority of Global Centers of Power
- Israeli Peace Plot
- Opposition to Israel and America based on Islamic Orders
- America's animosity towards Jihadi groups
- The Colonial Goal behind the Zionist Regime
- The Reasons why the Palestinians must Start Using Guns
- Negotiation: Forbidden and Useless
- Iran is Opposed to both the Usurping Zionist State and its People
- Divine Promise: Liberation of Al-Quds [Jerusalem]
- Israel and America: Doomed to Annihilation

In conversation with the young stand official, Samuels argued that "both Palestinians and Israelis need peace," he responded almost sadly, "we Iran will never allow them to make peace" - to which Samuels retorted, "since the Iran-Iraq war, you have made peace with yourt former enemy..." His reply: "yes, because we both hate America."

The featured cartoon: [Israeli soldier says "the bomb in the teddy bear is for Arab children"] "It's for kids. It's great for me",  based apparently on a Persian proverb.
Cartoonist: Maziyar Bijani (reportedly denounced in the past for his antisemitic caricatures -
https://en.wikipedia.org/wiki/Maziyar_Bizhani)
Publisher: خیزش نو  (New Uprising)
Year Published: 1395/2016

Interventions, Volume 1 - On US Crimes in Iran (See photo n.3)

The first volume of interviews examines 25 years of US crimes in Iran from 1332 to 1357 (Muslim calendar) includes sensitive sections of Iran, such as the August 28 coup, the formation of SAVAK, the uprising of June 15, capitulation, and so on. The Kayhan Office of Research is planning to review other US political, military, economic, and cultural interventions in Iran. "Interventions" is the fifty-third volume of the collection.

Interventions, volume 2 - On US Crimes in Iran

This volume continues the narrative of 60 years of US crimes in Iran during the period from 1332 to 1392. This second volume tells of:
One of the pilots who was invited [by the American-led putsch] to participate in the coup of Mashhad (Nogheh), said: "They told me that your mission is to bombard the Imam [in Jamaran] and the television, and we can get up to five million people We will kill if necessary [during the operation], land in one of the Gulf States or on the US Navy in the Gulf... You are against the people or with the government that you want to kill all these?' They said that we disagree with the government, but whoever wants to hinder our work, we have no choice but to kill all of them."

Interventions, volume 3 - On US Crimes in Iran

Another of these so-called moderate groups was the Freedom Movement headed by Mehdi Bazargan's engineer, and after him, Ibrahim Yazdi, who had been linked to the US government and Saddam's regime since 1979 and sought to overthrow the Islamic Republic of Iran and seize power. During the eight years of the imposed war, the group played the role of the fifth column of the American Ba'athist regime in Iraq. After the end of the war, the group has always played that fifth role for the United States in Iran. For example, in 2008, when the US government allocated $ 400 million to destabilize the Iranian government. After returning from the US in June 2008, Ebrahim explicitly outlined the strategy of overthrowing the regime at the meetings of the political office of the Freedom Movement.

Interventions, volume 4 - On US Crimes in Iran

This volume is dedicated to the holy martyrs of the 8th year and examines the record of American involvement in the political, military and social affairs of Islamic Iran. The chapters are: US Role in Imposed War, US Support for Terrorist Groups.

Excerpts from the back cover
"It is impossible to reach a fair resolution to the Arab-Israeli conflict since these religious parties view Arabs as human waste which has to be disposed of. Wars are a way of life according to their religious texts: "The Lord says No Peace for the Wicked", the hardliners keep repeating the saying "A Good Arab is a Dead Arab" and "there is no salvation as long as the Arabs are in Palestine".

"By no means hatemongers... they are displaying quite legitimate publications... these publishers display texts predominently identified with the Palestinan cause within the bounds of freedom of expression... This Fair focussed widely this year on respect for this human right... we too reject censorship... our work, in cooperation with the Fair, is to alert the authorities when that right is abused and foments danger to the public good or violates German law", concluded Samuels. 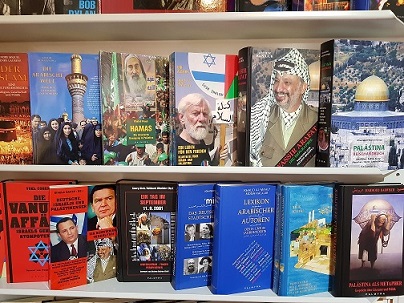 Its "Runner-Up" Goes to Egypt for displaying the latest antisemitic conspiracy theory screed.