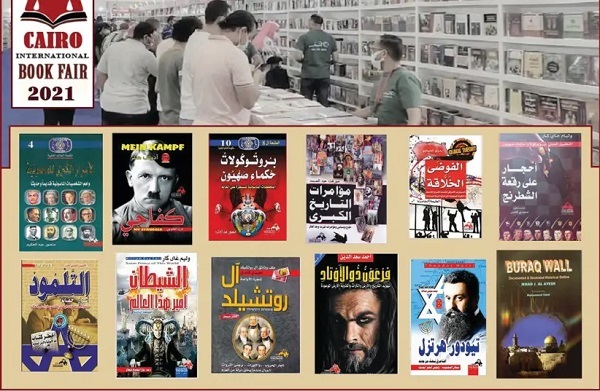 COVID-19 closed down some of the Arab fairs, but until last year, Abu Dhabi was among the offenders. This May, in the spirit of the Abraham Accords, that book fair was totally clean.

This was not the case of Egypt, however, where the ongoing fair hosts 1,218 publishers in 756 stands representing 25 countries, led by Spain, whose ambassador recently waxed lyrical regarding Hispano-Arab literature.

At the same time, Egyptian author Mansour Abdel Hakim was signing at the Dar Al Kitab Al Arabi (House of the Arab Book) stand, the fourth volume in his series The Great Secrets of Freemasonry – The World Hidden Government (in English and in Arabic). This demeaning book takes you through various conspiracy theories and the beliefs they promote, including one that says Jews divided the world into two parts: masters and slaves.

Each year in Frankfurt we present The Worst Offender Award. In 2019, it went to Iran for its books for four-to-seven-year-old children extolling “shehada,” suicide martyrdom. The runner-up award went to Egypt for a plethora of questionable editions.

Today, at the Cairo International Book Fair 2021, the Shourouk bookstore proudly features these bestselling hate books:
• Mein Kampf (Hitler’s genocidal manifesto)
• The Protocols of the Elders of Zion (the czarist secret police forgery, revisited by the aforementioned Mansour Abdel Hakim)
• History’s Conspiracies (especially the Jewish ones against Islam)
• Chaos Theory (how the Jews create chaos to divide the Muslims, suffused with a blood-libel taint)
• Pawns in the Game (yet another volume about the manipulative Jews, translated from the book authored by the infamous antisemite William Guy Carr)
• Exposing Jewish Plots (on secret conspiracies within the Talmud)
• Satan, Prince of This World (a translation of another Guy Carr anti-Jewish diatribe about “synagogues of Satan”)
• The Rothschilds (money + power = Jews)
• Pharaoh of Stakes – The Judaization of History (on how the Jews have deformed history for their own benefit)
• Theodor Herzl, Satan of Zionism and Devil of the Modern Era (another violently antisemitic book, in case there were any doubts).

In the past, we have pointed out to many Arab Culture Ministers that they have asked for the removal of any texts criticizing or offending Islam, and that we are requesting similar respect for Judaism.

One potentially explosive book in English and Arabic is Buraq Wall, subtitled Documented and Illustrated Historical Outline, by Jehad J. Al Ayesh. It posits that on his night flight from Mecca to heaven and back via Al-Quds (Jerusalem), the Prophet Muhammad tethered his horse, Buraq, to the Western Wall, which therefore makes it a Muslim holy site.

Chapters include, “Worshiping near the Wall is a new heresy in the religion of Jews,” “Jewish aggression to Judaize the Wall and the yard,” and “The Wall is the gate of Jews to raid al-Aqsa Mosque.” The book makes political claims regarding the Western Wall, in order to cast non-Muslims as trespassers. This would include the Mugrabi ramp onto Haram Al-Sharif (the Temple Mount). Ironically, Israel, in respect to Islam, never removed the pre-1967 “Buraq Wall” sign on the way to the Western Wall.

A year before Turkey was to become the Frankfurt Book Fair guest of honor, the president of the Turkish Publishers Association told me that the annual wave of Judeo-phobic volumes had disappeared, as they were placed on the shelves by anti-Turkish campaigners, representing both the geopolitical divide in the Muslim world and campaigning against Turkish entry into the European Union. He argued that all books at the fair would have a silver sticker attached to make them “kosher.”

He said, “Never mind, however good or bad, we will never allow covers with anything displaying Jews or Israel.”

In 2019, the United States disbanded its stand at the Cairo Book Fair, based on our findings.

This year, we turned to the Egyptian Culture Minister Inès Abdel Daïm and her Spanish counterpart, José Manuel Rodriguez Uribes, to take measures, at least against the Dar Al Kitab Al Arabi publisher and its outlet El Shourouk.

We also argued that such publishers are breaking German law and have no place at October’s Frankfurt Book Fair.

After a presentation to the Education Committee of the European Parliament some years ago, a British MEP spoke of the danger of incitement to hatred by such books – both in Arabic and in English language editions – some of which were being used in high schools. A few weeks later, then-prime minister David Cameron announced steps to block their importation.

Books are sold in Arab countries for between one and five dollars. This year, Dar Al Kitab Al Arabi has promised free delivery within three days. This would be a wonderful exercise in promoting literacy, if only it excluded hate.

One thing is certain: The Cairo Book Fair and Dar Al Kitab Al Arabi have been promoted to our “Worst Offender Award” status for 2021. It is ironic that the first Arab country to make peace with Israel now needs an education on the Abraham Accords.