UNESCO Grants Academic Certificates to Incarcerated Terrorists: A Second Round

In the 28 years of the Simon Wiesenthal Centre’s NGO accreditation to UNESCO, it came as a shock to learn in February 2020, from the well-respected NGO Monitor, that the organization had granted academic certificates to terrorism “graduates” and their murderous “instructors.”

The NGO Monitor report had focussed on a 2018 ceremony of An Najah University in Nablus to celebrate 61 Palestinian terrorists who had completed a course on “Human Rights,” while incarcerated in Israeli prisons. The University had claimed the ceremony was organized by UNESCO.

UNESCO had then denied responsibility for actions of University Chairs in its name, even when they may abuse the good reputation of the organization. We are aware, however, that member States National Commissions – in regular contact with Paris headquarters – can impact on unacceptable UNESCO University Chairs behaviour.

In this case, the Palestinian UNESCO National Commission would then be compelled to stand by the values of UNESCO or else continue extolling terror. 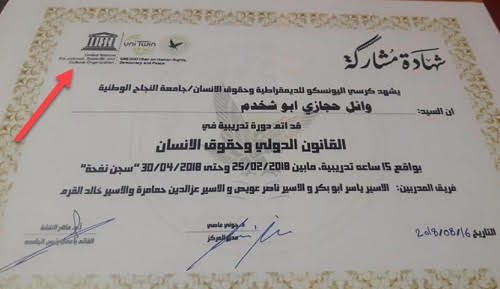 Only yesterday, the equally respected Palestinian Media Watch (PMW) presented a “second round,” with many more examples and film clips of families showing their terrorist prisoner relatives’ certificates for a course on “International Law and Human Rights,” reportedly, issued by UNESCO.

Palestinian Television also displayed such a certificate, claiming it was issued jointly by UNESCO with the Palestinian An-Najah University to “laureate” Wa’al Hajazi Abu Shahadm, responsible for the murder of six civilians and several wounded in the Jerusalem open-air market. 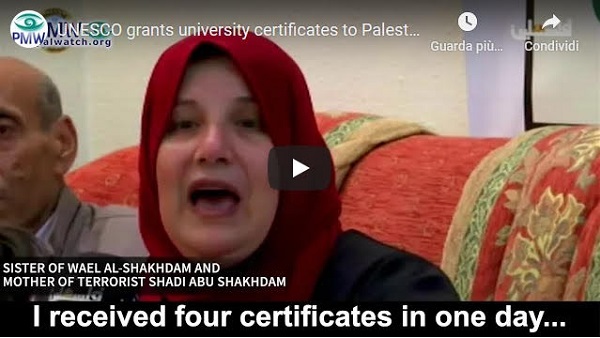 The certificate also recognized three “instructors” in the UNESCO-approved course:

- Yasser Abu Bakr, a member of the terrorist Al-Aqsa Brigade and murderer of a nine-month-old baby, a policeman and another civilian;

- Nasr Awais, who orchestrated the murder of 14 people in various attacks;

- Izz Al-Din Khaled Hamemrah, who organized a bus bombing in Jerusalem, leaving 8 dead and dozens wounded, and a shoot-out in Bethlehem.

Madam Director-General, we urge you to investigate whether UNESCO grants such certificates to incarcerated terrorists on an international basis. At the minimum, we expect measures to be taken in regard to the UNESCO office in Ramallah and a belated removal of “Johnny Assi” from any UNESCO engagement.