The SS and the Vatican

Blog by Dr. Shimon Samuels published in The Jerusalem Post
14 May 2020
https://www.jpost.com/diaspora/antisemitism/the-ss-and-the-vatican-628075

What role did Erich Priebke play? The Pope Pius XII Archives may tell us. 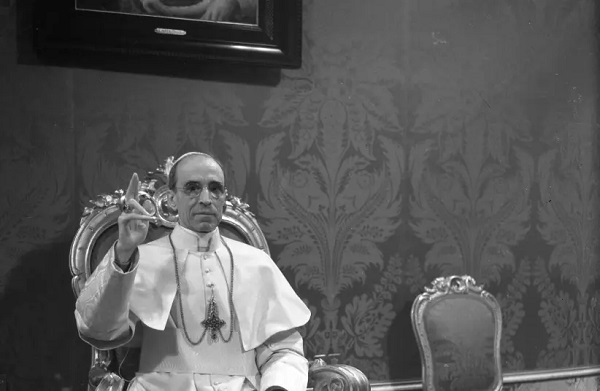 On March 2, 2020, Pope Francis kept his commitment to open the secret archives of Pope Pius XII, to discover the truth of why the war-time pontiff had remained silent in the face of the Holocaust.

Those bent on his canonization speak of his equally silent willingness to hide Jews in monasteries and even in the Vatican.

Others claim he was keeping the Church “neutral” since his pre-war concordat with Hitler that was meant to defend Catholics from the “Communist greater danger.”

Media have reported on initial findings in the archives, but due to the pandemic, the 11 files have been reclosed until conditions permit further research.

In the meantime, we highlight the history of incidents in Rome itself, targeting Jews and the Italian resistance:

• SS Obersturmbannführer Herbert Kappler, who supervised the deportation of Austrian Jews, moved on to Italy. There, prior to him deporting 1,957 Jews to Auschwitz in 1943, he had demanded 50 kg. of gold from the Jewish leaders, allegedly falsely promising their protection.

• In 1947, Kappler was sentenced to life imprisonment. In 1977, terminally ill, he was transferred to a hospital, from where he escaped hidden in a suitcase, to Germany, where he died six months later.

• Earlier, in 1946, Priebke fled a British prison camp in Rimini, and eventually received a new identity through the Church allowing him to go to Argentina.

A Wiesenthal Center sting in Germany led ABC television correspondent Sam Donaldson, to follow on to Bariloche, home to many Nazi fugitives. It was March 1994. There he met and interviewed Erich Priebke, then president of the local German school.

My colleague, Wiesenthal Center associate dean Rabbi Abraham Cooper, and I flew to Rome to request from then-Italian Prime Minister, Silvio Berlusconi, an extradition order for Priebke’s role in the Ardeatine massacre.

In March 1944, the Italian resistance had set a trap in the center of Rome for a brigade of German-ethnic military police from the Italian South Tyrol region. The partisans had killed 33 Germans. That same evening, Hitler demanded the execution of 10 Italians for every German killed, to take place within 24 hours.

The 335 victims of the reprisal included residents of Via Rasella, the site of the bombing, along with anti-Fascist prisoners and 75 Jews captured in the ghetto.

From the Kew Gardens Public Record Office in London, we had two documents: one signed by Kappler, claiming Priebke selected the 335 victims of the massacre, and the second signed by Priebke, stating that he had personally shot two of those on the list.

Berlusconi slapped the table: “I want this man on trial in Rome!”

HE SENT US to a cigar-chomping official in the Justice Ministry, Liliana Ferraro. The following week, we organized a dinner for her in Paris, inviting an Argentine diplomat, a prosecutor in the Klaus Barbie trial and a Herald Tribune (now New York Times International) correspondent to write the extradition order together.

Ferraro warned that, as Priebke had fled from a British military prison, Rome would hold a military trial. We were not impressed!

In 1992, I had been invited by Argentine president Carlos Menem to be the first to review the Nazi files in the Presidential Palace, the Casa Rosada. I announced that documents on Josef Mengele were missing and there was no file on Adolf Eichmann. Menem felt my critique was enough, and three years later no longer had interest to extradite Priebke.

We thus brought to Argentina several members of the Ardeatine Martyrs’ families, which made a major media impact. It took 17 months, but in August 1995, Priebke arrived on Roman soil.

Every month I was to sit in the military court. The concierge in my hotel told me, “My grandfather was a victim of Priebke.” Italian public opinion was with us. Priebke was first acquitted in August 1996, for “simply following orders.”

The grief-stricken Martyrs’ families, guided by then-Roman Jewish community president Riccardo Pacifici, occupied the court as a sign of protest.

It was after midnight when I got the call from then-foreign minister Lamberto Dini, with the request to “come to the Ministry now!”

He was seated with a Justice Ministry official:

Why was the Martyrs’ occupation of the court so necessary? We feared that an exonerated Priebke would be driven the six kilometers to the Vatican to demand sanctuary. He apparently had contacts in the Curia.

It had even been alleged that he had informed a cleric close to Pope Pius on the morning of the planned massacre. Above all, we did not wish to bring embarrassment to Pope John Paul II.

Priebke, after appeals, was condemned to life imprisonment. Arguing his age, he was allowed house arrest in the home of his lawyer. Robust, he died in 2013 at the age of 100, and was buried in an unmarked grave.

He was the prime example of Simon Wiesenthal’s aphorism, “Longevity is not a cause for impunity.” Ironically, Priebke had outlived most of the leaders of the Martyrs’ families.

After the massacre, the Vatican newspaper Osservatore Romano, in a controversial editorial, “deplored the violence of the guilty parties who escaped arrest.” Many interpreted the “guilty” as the “Communist, terrorist, resistance.”

We are eager to know if “Priebke” appears in the Pius XII archives and await its post-virus reopening.