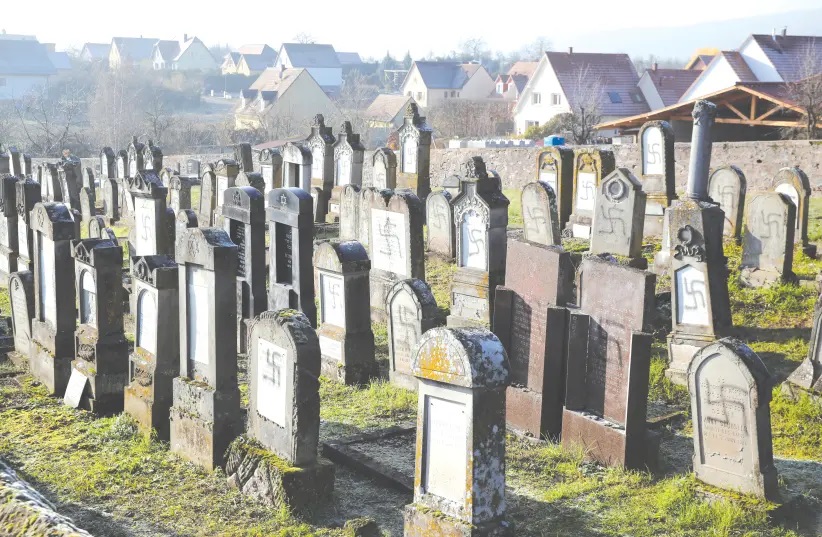 I felt like the surgeon who does not operate on family members.

For years, my desk was swamped with antisemitica – from Right and Left, religious and cults – but I had never been personally touched.

I rebuilt my grandparents’ graves on condition that the gate be locked after hours and the walls have nighttime motion-sensitive lighting.

Since then, every cemetery or Holocaust memorial desecration – the most cowardly form of antisemitism – is a signpost along the path of evil.

Alsace has been privileged in this form of Jew-hatred, and Westhoffen will sadly not be the last. However, the last event resulted in the renewal of correspondence with attorney Stephen Draisin of Englewood, New Jersey. He recalled how “we together laid a wreath at the Natzweiler-Struthof concentration camp ceremony almost 30 years ago.”

Steve was about to visit France and was shocked that the French Tourism Office in New York knew nothing of the only such camp on French soil. It had “hosted” more than 52,000 prisoners – of which 10,500 were Jews – a mere 30-minute drive from Strasbourg.

Of even greater outrage was the small building outside the camp marked “Gas Chamber” (Chambre à gaz). Today, a memorial stone lists the 86 Jews – 57 men and 29 women – who were gassed on demand by the head of the Medicine Faculty of Strasbourg Reichs University. SS Capt. August Hirt lamented the lack of skeletons to teach anatomy. Germany responded with the only Jews destined for murder who were returned to the West “to fulfill educational needs.” After gassing these Jews, Hirt had created his own skeleton collection.

Prisoners included so-called “Jewish-Bolshevik commissars,” resisters from all over Europe, Special Operations Executive female agents and others, of whom more than 22,000 people of 32 nationalities were killed and cremated, their ashes dumped in a pit that today stands as part of the memorial.

We argued that the large cross in the ash pit of cremated prisoners should be accompanied by a Star of David. One official responded, “That would then require symbols for Roma Gypsies, North African Muslims and gays,” adding, “the Cross is the symbol of all humanity, all the victims.”

Draisin emphasized that, “It is horrible enough that Jews were killed there for only the ‘crime’ of being Jewish. It now seems, however, that their very identity is being ignored if in fact there is no Star of David.”

We then informed all parties that CBS’s Sunday Morning with Charles Osgood would be coming to film the 1989 commemoration ceremony in the camp.

The authorities suddenly rethought the question, inviting Draisin and myself to place the first plaque to acknowledge the fate of Jews in the camp. The ceremony was broadcast by CBS on July 2, 1989. In the program, Draisin thanked the Wiesenthal Center. I followed, noting, “Advocate Draisin will be returning home to New Jersey. For me, the job is not yet over until we have plaques for the Roma, North African Muslims and gays, etc.”

In fact, Draisin is still very involved with the New Jersey Commission on Holocaust Education.

The irony is that among all endangered minorities in Europe, in regard to cemetery desecration, it is mainly the Jews who are killed twice.

The author is director for international relations at the Simon Wiesenthal Center.