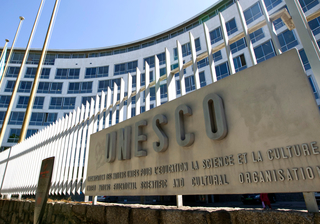 1) A Jordanian apparent fear of a Saudi takeover of the custodianship for Jerusalem’s holy sites and a Palestinian suspicion of US support for Riyadh, in the atmosphere of President Donald Trump’s US Embassy move to Jerusalem.

2) The Sunni/Shia split and the role of moderate states, such as Tunisia, conscious of a Palestine fatigue in their heritage demands.

3) The discipline of the host, Azerbaijan – a moderate Muslim friend of Israel, with a successful Jewish community absent of antisemitic threats.

In 2017, at the WHC in Krakow, I found myself in the company of a former mayor of Hebron. When I stood to speak, as an NGO delegate, I was handed a slip of paper advising that my neighbor had reportedly shot six yeshiva boys praying in the Machpela Cave. Such an invitation travesty could not happen in Baku.

I first participated in the year 2000 World Heritage Committee, held in Cairns, Australia, to speak of the discotheque opened by the mayor of Oswiecim, in Auschwitz-Birkenau.

After stating to the assembly: “I arrive from the hell of Auschwitz to the paradise of the Barrier Reef, to tell you of the ‘Auschwitz discotheque’,” I was stopped by the chair, who turned to the Polish delegate: “Mr. Ambassador, those two words in conjunction are unthinkable – close it!” Upon landing back in Europe, Warsaw had closed it. I felt pride in the WHC’s preservation priority.

Since 2011, that focus was overshadowed by constant Palestinian demands on Jewish heritage. Their official tentative list includes the Western Wall and the Qumran Dead Sea Scrolls.

The Palestinian people, indeed, have a right to celebrate their own heritage, but their narrative cannot be validated by the identification theft of Jewish heritage, with a roadmap for de-Judaization.

UNESCO had promised a policy of de-politicization by adopting a whitewash mechanism based on two procedures, so far applicable only to Israel (designated as “the Occupying Power”) and Jordan and the Palestinians (denoted as “the States Parties”).

1) “Consensus” – i.e., no debate and no vote, simply passing the Resolutions as presented.

2) “Annex” – i.e., all the nasty charges against Israel remain under the title of “Annex,” ignoring the principle that any sale or rental contract would consider “annexes” as an “integral part of the document.”

As the only voice present for the Jewish people, though non-binding, the Simon Wiesenthal Center views the very passage of such cosmetically-treated resolutions as offensive to world Jewry and to Judaism itself.

In any case, variants will be regurgitated not only at the WHC, but at the spring and autumn UNESCO executive boards and, this year, for endorsement by the General Assembly plenary in November.

A few days before the WHC opening in Baku, I attended a meeting of the “Committee on the Exercise of the Inalienable Rights of the Palestinian People” (CEIRPP) at the United Nations in Geneva.

A Palestinian official announced a series of measures in international organizations and principally UN agencies:

1) In the International Court of Justice (ICJ), against the United States’ transfer of its embassy to Jerusalem.

2) At the UN Security Council, to protest the opening of a tunnel under the City of David.

3) The Jerusalem municipal plans for a cable car to cross the Ben Hinnom valley for tourism. One should note the continuity of the status quo, as this would replace a rusty funicular used to feed Jews under Arab siege in the Old City in 1948. The cable-car became defunct during the succeeding 19 years of Jordanian occupation. The Palestinians were expected to protest the cable car at this WHC, but this was reportedly not acceptable under an Azeri chairman.

The last heritage site inscribed by this WHC went to Iraq for the conservation of Babylon – once a Jewish chapter, but no longer a Jewish problem.

Next year, when the WHC will be held in Fujian, China, perhaps the host’s first question will be: “What’s a Qumran?”

The writer is the Simon Wiesenthal Center’s director for international relations and its chief observer to UNESCO.