On Sunday 30 June, in the presence of Jerusalem Mayor Moshe Leon and representatives of the Jewish, Catholic, Protestant and Coptic Christian communities, Paris Mayor Anne Hidalgo dedicated the Jerusalem Square.

The square’s location is in the growingly Jewish 17th district - the destination of Jewish families fleeing from Islamist-dense suburbs north of Paris.

Mayor Leon stressed his vision of a multifaith Jerusalem at peace with one another.

Mayor Hidalgo responded that, as a World Heritage site, the Holy City was sacred to Jews, Christians and Muslims. She noted that Paris had had a Jerusalem Street since the Middle Ages, which was built over in 1883 to make room for the Courthouse.

She noted the coincidence that the new Jerusalem Square will face the newly built Courthouse, adding that, in Jerusalem there is a Paris Square and the current inauguration should cement the friendship between the two cities.

The square is close to the offices of the Simon Wiesenthal Centre - Europe and the ceremony was thus attended by the Centre’s members. 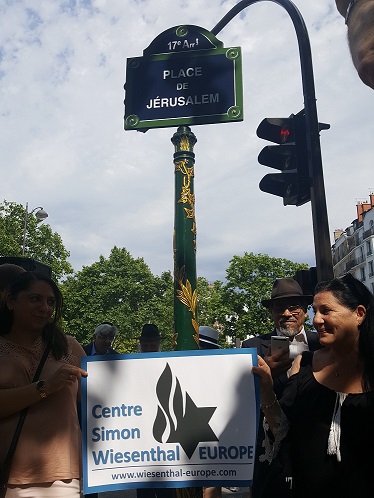 Not everyone was happy with the occasion. A few dozen so-called pro-Palestinian protesters were filmed by RT television [see link: https://francais.rt.com/france/63492-pro-palestiniens-manifestent-contre-inauguration-place-de-jerusalem-paris], claiming “the Paris Mayor is complicit with Israeli colonization.”

A day in the life of the Wiesenthal Centre - Europe.