Wiesenthal Centre at 3 United Nations-based meetings in 1 week to Highlight “Israeli Occupation”: the Common Denominator is the “de-Judaization of the Holy Land”

“In the book of Amos, the Lord warned of the penalty for the three crimes of Damascus... for the fourth I will not relent.”

A Report from the Simon Wiesenthal Centre’s Director for International Relations, Dr. Shimon Samuels, Chief Observer to the UN in Geneva and UNESCO

1) 27-28 June, UN Geneva International Conference on the Question of Jerusalem, convened by the Committee on the Exercise of the Inalienable Rights of the Palestinian People (CEIRPP) through the UN Division of Palestinian Rights and the Organization of Islamic Cooperation.

3) 30 June, UNESCO World Heritage Committee in Baku, Azerbaijan, with a repeated focus on Jerusalem and Hebron.

The first event was a series of excruciating speeches from elegantly antisemitic diplomats, naive or suicidal “lemming” Jews and Israeli NGO officials, fake news Palestinian spin masters, the Iranian Ambassador’s Holocaust revisionism, an American Methodist obsessed with the “evil” of Christian Zionists and an American Jewish academic compulsive on Trump, who prophesied that “Israel will annex a 15 kilometre ring around Jerusalem with US backing and replace the Arab school curriculum under American leadership.” 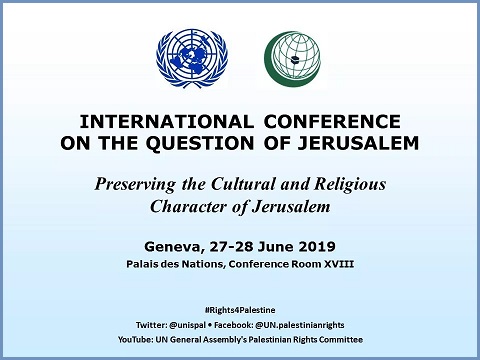 Palestinian Deputy Foreign Minister, Amir Ammar Hijazi, lamented the dashed 1948 Jerusalem churches proposed status as a "Corpus Separatum,” he enthused that the Palestinians had welcomed pre-Israel Jewish refugees, only to become refugees themselves, adding “the UN decided to partition Palestine... we accepted to receive 22% of our land... We are here to stay, just as thousands of years ago did the Palestinian Canaanites... We will isolate the US and Guatemala for recognizing Jerusalem as Israel’s capital.”

Bernard Sabella, Head of Services to Palestinian Refugees, argued “Jesus Christ and I grew up in the same Jerusalem neighbourhood as Christians,” and lamented, “Muslims cannot pray at Rachel’s Tomb (the Rahul Mosque) or at the Buraq (the Kotel Western Wall), which a British 1919 document had determined was Muslim.”

Mustafa Abu Sway, a Waqf member at Al-Quds University: “There is no Commandment that [Jews] should have a sovereign state,” adding, “there are no Muslim or Christian 'Quarters' in Jerusalem, just as there was no Judeo-Christian civilization... Maimonides was part of Muslim history.”

An Israeli female student Rabbi, almost tearful, spoke of how “the Zionist movement brought us sovereignty, the State of Israel is an irresponsible power... we must oppose the horror of Jerusalem Day... My family benefited from the Naqba... we have an autistic reality.”

An Israeli academic stressed that “the Israeli government and the settlers have physically changed the character of Jerusalem through archaeological excavation... I suggest a round table of Israelis, Palestinians and international parties. Steps would be taken jointly.”

His dream was struck down by a Palestinian official: “I will not accept a round table with a foot on my neck.”

The Iranian Ambassador gave the coup de grace!: "We support Palestine not because their enemy is the Jews... Regarding the Bahrain Plan for $50 billion ‘to forget the subjugation’, I paraphrase Hannah Arendt: 'The SS destroyed their victim before he was to mount the scaffold'.” 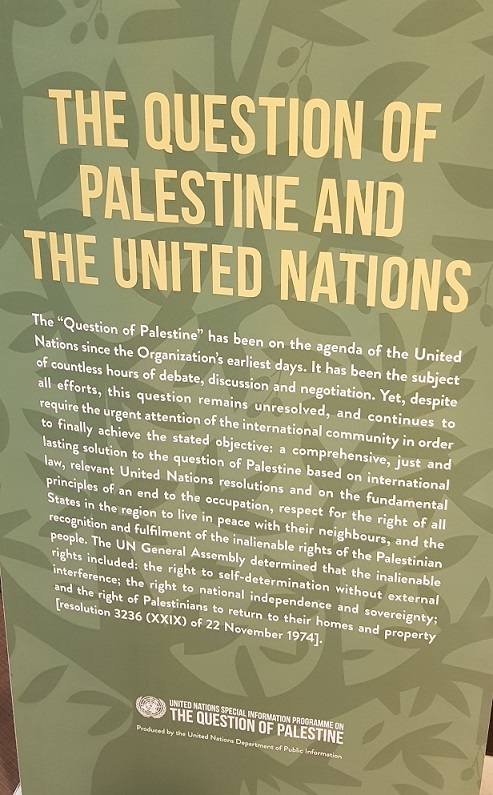 Poster from the UN role and Israeli Occupation exhibition outside the hall.

Director of the Royal Jordanian Hashemite Fund for the Restoration of Al Aqsa, Wasfi Kailani, ended his paper, stating, “The Hashemite Kings were aware of their role... to counter colonization and to safeguard the Holy sites from the Zionist project of Judaizing Palestine.”

The common denominator and intent among most of the speakers and their UN hosts, was undeniably “dejudaization,” which will be repeated at all three events this week.

In the Biblical Book of Amos, the Lord warns of the penalty for “the three crimes of Damascus,” adding, “For the fourth, I will not relent.”