“Norway's neo-Nazi movement, Vigrid, should be banned as an example that incitement to hate is not freedom of expression!”

In a letter to Delphine Ernotte, the newly elected President of the European Broadcasting Union (EBU) – better known for its subsidiary, the Eurovision Song Contest –, the Simon Wiesenthal Centre Director for International Relations, Dr. Shimon Samuels, brought attention to “an apparent indifference to antisemitism in one of your 116 member organizations, the Norwegian NRK (Norsk rikskringkasting - Norwegian Broadcasting Corporation)...” continuing, “The case of NRK P13 digital music channel radio host, Shaun Henrik Matheson’s rant to his predominantly young audience: ‘I wish the vaccine did not work in Israel... Israel is a shitty country!’ – is unacceptable.”

The letter revealed that, “Though the State Channel Council and the channel head finally apologized and agreed that this was antisemitism, the radio host is still on the air... The Culture Minister – a member of the channel’s board – did not denounce the affair, but rather stated his pride in this State channel.”

Samuels added, “Vigrid, reportedly a Nordic neo-Nazi organization, vaunted the programme and took it one step further, posting that ‘it did not go far enough in killing all Jews.’ This is reminiscent of Vidkun Quisling, Norway’s Nazi collaborationist leader, who deported its Jews to the death camps in 1942.” ... “Today’s neo-Nazi movement Vigrid should be banned as an example that incitement to hate is not freedom of expression... Lest it ends with another Breivik, the mass-murderer of Utøya!” 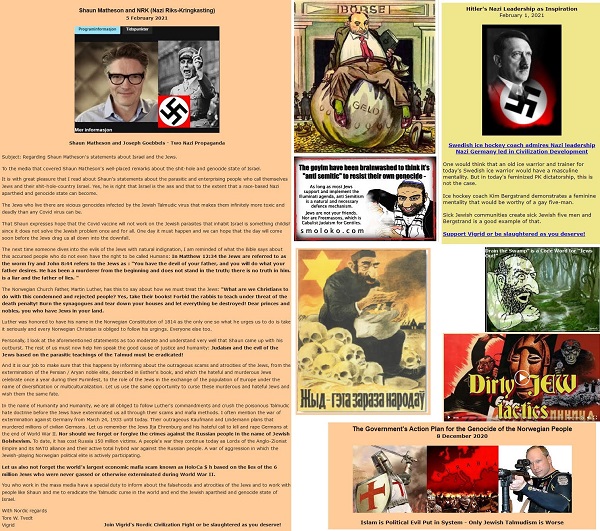 Some examples of the brand of hate and violence on: http://vigrid.net/

The Centre proposed that, “Today’s Norwegian Police could invoke Law 185 on hate speech, though this failed in 2019, when a singer screamed ‘F-k the Jews’ from the concert stage. This was considered ‘acceptable critique’ of Israel, just as the City of Bergen now proposes to boycott, not goods from the ‘occupied territories’..., but from all of Israel!”

“Madam President, we urge the EBU to suspend NRK, pending the firing of the host, Matheson. We have suggested to Norway’s Prime Minister, Erna Solberg, that NRK should adopt the IHRA (International Holocaust Remembrance Alliance) Definition of Antisemitism to be better equipped to identify Jew hatred.”

“To date, the IHRA Definition has been adopted by the EU, its single member States, including France and Norway, municipalities, football clubs, private companies as well as public institutions... Indeed, this may be appropriate for the EBU itself, in conformity with your compelling Mission Statement: ‘At the EBU... we build on our founding ethos of solidarity and cooperation to create a centre for learning and sharing’,” concluded Samuels.