13th Holocaust Essay Award for Russian University Laureates: "This programme has educated a whole new generation of some 20,000 messengers and militants for tolerance and multipliers against extremism"

This unique Holocaust essay competition programme, co-organized by the Simon Wiesenthal Centre-Europe, (CSW), the Association Verbe et Lumiere-Vigilance (VetL-V) and the Russian Holocaust Centre (RHC), now in its thirteenth year, annually invites to Paris the five student winners from across the former Soviet Union, to present their research findings at UNESCO.

Of the 2017 laureates, two are from Moscow and one each from Irkutsk (Siberia), Nizhny-Novgorod, (Volga) and Berlin (from Russia, now living in Germany). These were chosen from well above 2,000 submissions.

Attended by the delegations of Russia, Austria, Germany, Israel and South Africa, the proceedings were opened by Mr. Qian Tang, UNESCO Assistant Director-General for Education. He commended the laureates' initiative for, "not only keeping alive the memory of the Holocaust in Russia, but for pushing UNESCO's mandate for a noble cause". Speaking of the annual event as "emblematic of UNESCO's commitment to Holocaust education", he presented the organization's new Holocaust Education Policy Guide, promising to join the Wiesenthal Center, Verbe et Lumiere-Vigilance and the Russian Holocaust Centre in publishing the thriteen year's winning essays.

Russian Delegate Alexei Kovalenko, stressed that "Holocaust crimes must have no Statute of Limitations", adding that "a Russian resolution on the Holocaust in the United Nations had garnered 55 states, but 135 member-states did not vote for it."

Dr. Shimon Samuels, Director for International Relations of the Simon Wiesenthal Centre, protested "the bloc politics of the UNESCO World Heritage Committee meeting in Crakow, where further theft of the Jewish heritage was on the agenda... Nevertheless, Mr.Tang must be congratulated for UNESCO's initiatives in Holocaust education and commemoration."

Child survivor, Evelyne Askolovich, testified to her deportation and the loss of her family: "Of 200 children deported in my convoy, only 5 survived... My family were the friends I made at Bergen-Belsen, just as the late Simone Veil would say about Auschwitz". Condolences were then voiced in memory of the late Minister, human rights activist and European leader.

Jonathan Arfi, Vice President of CRIF (the Council of French Jews), argued that "democracy requires collective memories in dialogue, not competition... One memory can not replace another's... Being a Jew in France today is a coin with two sides: 1. a community of 450,000 full of vitality;  2. Subject to terror, Holocaust denial and BDS."

Adv. David Pere, of the French Association of Terror Victims, spoke of the deportation of his family, asking "why thousands of Russian non-Jewish students have been drawn to Holocaust research, even bolder in the aftermath of the Soviet Union?... Not easy politically neutral research, you understood that this is a fight worth fighting for - use it to make a difference!"

Dr. Ilya Altman, Chairman of the Russian Holocaust Centre in Moscow introduced the laureates, emphasizing that he now has 13 volumes of papers - submitted to the contest over the years -  adding, "we do not forget the other victims ...Why otherwise would French intellectuals, journalists and politicians have come to UNESCO to hear Russian papers over the past thirteen years?"

The Laureates then each presented an abstract of their papers:

Roman Zhigun (Moscow, Russia), “Cinematographers of the Polish People’s Republic in the post-war struggle against antisemitism”

Arina Demina (Irkutsk, Russia), “The role of the Holocaust in the formation of the fundamental foundations of the Apartheid doctrine in South Africa”

Irina Makhalova (Moscow, Russia), “Participation of collaborators in the persecution and destruction of the Crimean Jewish population during the Nazi occupation (1941-1944)”

Denis Kolesov (Nizhny Novgorod, Russia), “Main provisions and problems of Holocaust education in the Federal Republic of Germany as a continuation of the policy of de-nazification”

Alena Epifanova (Berlin, Germany), “From banned commemoration to cautious remembrance? An analysis of the presentation of the Holocaust in Russian history textbooks, 1990-2016” 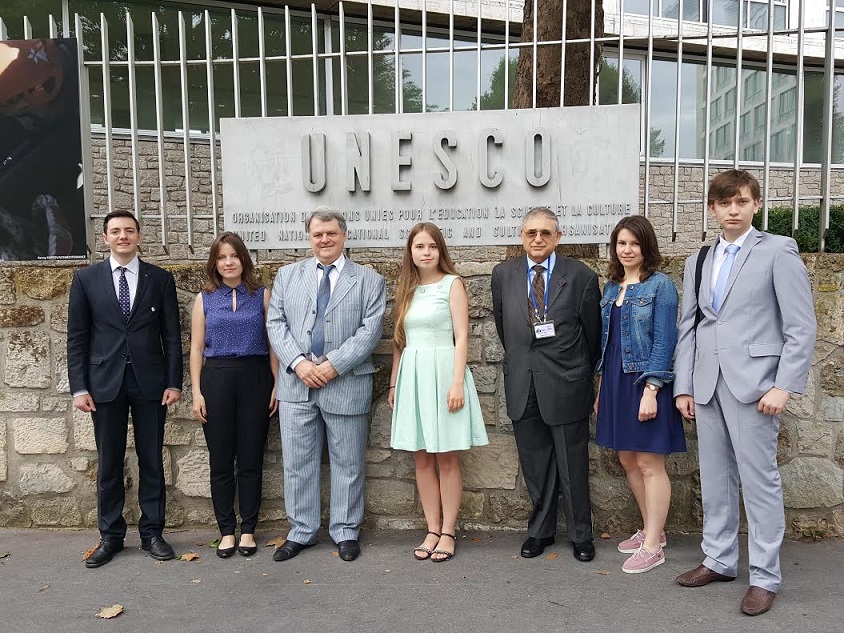 Samuels thanked UNESCO and Special Advisor to the Director-General, Dr. Graciela Vaserman Samuels for conceiving this event and congratulated Dr. Altman for “creating a new generation across the former Soviet Union of some 20,000 messengers and militants for tolerance and multipliers against extremism.”

Verbe et Lumière-Vigilance President, Richard Odier, concluded in stressing the need for empathy: "Beyond the figures and the analysis are the real people. He lamented the antisemitic murder of 66 year old Dr. Sarah Halimi, tortured and thrown from her balcony to her death by her Jihadist neighbour, screaming 'Allahu Akbar!' The case received no attention, which was blamed on the elections... There is a link between Sarah Halimi and the deportation of Evelyne Askolovich and Simone Veil - Jew hatred!"