“You cannot permit on Polish soil, where a third of the Jewish people perished, an outrageous theft of Judaism’s narrative and heritage at a Crakow UN conference in the very shadow of Auschwitz-Birkenau.”

“The Palestinians and their retinue must be restrained from further fast track tactics and mayhem to monopolize the session, at the cost of truly endangered sites awaiting attention.”

In a letter to the Polish Chairperson, Prof. Jacek Purchla, of the 41st UNESCO World Heritage Committee (WHC), to be held in Cracow, 2-12 July 2017, the Simon Wiesenthal Centre Director for International Relations and WHC Observer, Dr. Shimon Samuels noted:

“- grave concern regarding the Cracow meeting, indeed a malaise in WHC management due to hostile takeover of the agenda

“- how we have worked for many years with the WHC, especially in regard to its protective mandate, as in the protection of Auschwitz-Birkenau

“- yet, since the Palestinian entry to UNESCO in November 2011, the WHC has been hijacked as a weapon for war by other means.

“- the July 2012 meeting in St. Petersburg, where the Palestinians trashed the WHC regulation requiring a 14 month minimum membership – they had been present only 7 months – but staked a claim to, no less than the Church of the Nativity in Bethlehem, on spurious grounds of urgency based on a fabricated ‘endangered’ status,

“ - this despite the definitive denial of their claim by the professional consultant to UNESCO, the International Council of Monuments and Sites (ICOMOS), the Palestinians used a stratagem to control the cradle of Christianity. Little wonder, subsequent extremist claims were heard that ‘Jesus was a Palestinian’, later evolving into ‘Jesus was a Muslim’.”

The Centre continued, “at the 2014 session, again despite the objection of the experts, they exploited the ‘emergency’ fast track to take Battir – the Beitar headquarters of Bar-Kochba’s Jewish revolt against the Romans in the year 132.

“The 40th session, in July 2016 (postponed due to the attempted putsch in Istanbul), was relocated and rescheduled to Paris headquarters in October. There the Western Wall and Temple Mount were effectually deJudaized. By a theological supercessionism, both these, the holiest to Jews worldwide, were then Islamicized by the UNESCO Executive Board.”

Samuels lamented, “As if this were not enough, the Palestinians have declared their intention to once again hijack the WHC to take over the Machpela Cave of the Patriarchs in Hebron, a site until now open to worshippers of all three monotheistic religions.”

He emphasized, “As Chairperson, you cannot permit on Polish soil – where a third of the Jewish people perished – an outrageous theft of Judaism’s narrative and heritage at a Crakow UN conference in the very shadow of Auschwitz-Birkenau...”

The Centre called on the Chairperson to “take every measure to prevent this and cooperate with ICOMOS to insist that all 21 WHC member-states show respect for professional competence and to Poland as the host country...”, continuing, “...the Palestinians and their retinue must be restrained from further fast track tactics and mayhem to monopolize the session, at the cost of truly endangered sites awaiting attention.”

“Keep the Cave of the Patriarchs as a three-faith shrine, without impugning its primordial Jewish identity...” “… Thereby, Poland will contribute to the depoliticization of the World Heritage Committee, to the relief of so many disenfranchised UNESCO member-states, who can only sit and observe the ravages of WHC’s integrity”, concluded Samuels. 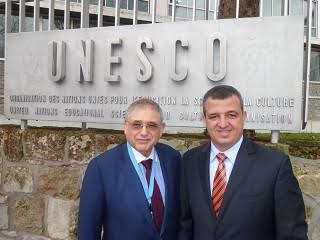