Poisoning the UNESCO Executive Board: Egypt's Representative and The Protocols of Zion

"Most worrying is that such hatred is the backdrop to the resolution denying Jewish heritage in all Jerusalem, East and West, to be voted at the end of the session."

The Simon Wiesenthal Centre is attending the 201st session of the UNESCO Executive Board by its Permanent Observer, Dr. Shimon Samuels.

Samuels noted that "the United Nations Education, Science and Culture Organization was founded in the aftermath of World War II, to expel the forces of hate and prejudice from the discourse of diplomacy."

This week, the 201st Executive Board of 58 member-states will interview nine candidates for the post of Director-General to succeed Ms. Irina Bokova in November.

"The candidates should reflect the pristine values of the founders, yet Hamlet's warning 'something is rotten' poisons the atmosphere", observed Samuels.

The Centre has learned that Dr. Khaled Abdel Ghaffar, Egypt's Minister of Higher Education and its representative to the Executive Board, is attending the current session. He is speaking to gather support for the Egyptian candidate.

As per the below clip, Dr. Ghaffar was sitting next to businessman and founder of El Shorouk Media Academy, Mohammed Farid Khamis, where he then listened to the latter's speech about the Protocols of Zion – the notorious Tsarist forgery of a world Jewish conspiracy described as a "warrant for genocide". The Minister then accepted an award from Mr. Khamis.
YouTube (Mar.27, 2017) courtesy of Sout Al Omma
https://www.youtube.com/watch? (Speech about Protocols from 2:21 – 5:00) 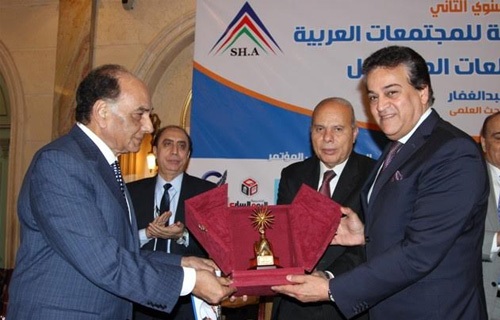 "Most worrying is that such hatred is the backdrop to the resolution denying Jewish heritage in all Jerusalem, East and West, to be voted at the end of the session..." "We are calling on UNESCO to protect its own values and find measures to suspend hatemongers and those who endorse bigotry from its proceedings", concluded Samuels.